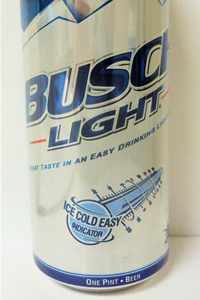 Beverage containers are one of the most common products with thermochromic inks. In this case, as the cans cool, an indicator appears to let you know that your drink is chilled and ready to drink.
Courtesy CTI Inks

In life, the only thing that stays the same is change. The only exception to that rule, of course, is the color of paint on your car. You might really hate that lime green, but there is no way -- no way -- you're going through the expensive and time-consuming chore of painting it all over again. You wish that the colors of the things in your life were as dynamic as life itself.

Well, sometimes our possessions and paints really can change color, thanks in part to thermochromic ink technology. Thermochromic inks take advantage of thermochromism, which refers to materials that change their hues in response to temperature fluctuations. Still hate that lime green? Pony up for the right paint and on a warm day, it could morph from a Kermit the Frog hue into a more tolerable sunshine yellow.

Thermochromic inks first hit the mainstream in the 1970s, appearing in one of that era's lasting icons -- the mood ring, which supposedly used the wearer's body heat as a sign of his or her emotional state.

More recently, a microwaveable maple syrup bottle featured a thermochromic label that indicated when its buttery, delicious goodness was warm enough for your waffles. And some beer cans sport graphics that appear when their hoppy contents are cool enough to provide optimum refreshment.

Since mood rings, thermochromic inks have evolved at a steady pace. They're still used in all sorts of silly novelty items, but they have many useful and creative applications, too: thermometers, clothing, paint, drink containers, toys, battery indicators, plastic products of all kinds and much more.

There are numerous companies integrating these dynamic, eye-catching inks into their products. Doing so can help them grab consumers' attention and differentiate a brand from those that use old-fashioned inks with just one static hue. Paired with a clever bit of creativity, such products provide real visual wow.

Keep reading and you'll see how these crazy inks pull their chameleon tricks. Be ready -- your eyes in are in for a surprise.

The Heat is On, The Color is Off 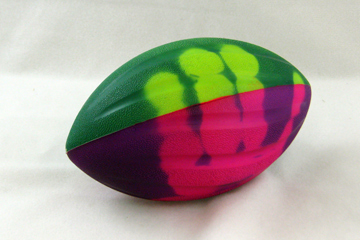 Some uses of thermochromic inks are serious, but most are just for fun. This football’s hues change dramatically when you grip it.
Courtesy Hallcrest

Liquid crystals are exactly what their name indicates -- a substance that has many properties of a liquid crossed with structural elements inherent to crystals. Peer through a microscope at a liquid crystal and you'll see a fluid that exhibits evident textures.

Liquid crystals are dynamic. Their properties change depending on environmental conditions; TLCs exhibit different colors in response to temperature changes. At lower temperatures, these liquid crystals are mostly in a solid, crystalline form. In this low temperature state, TLCs may not reflect much light at all, thus, appearing black.

Apply warmth and increase it bit by bit, though, and you'll see the TLCs shift from black to just about every color of the rainbow. This happens because as temperature rises, spacing between the crystals changes, and as a result, they reflect light differently.

You can't just plop TLCs onto a product to make it change colors. The liquid crystals must first be microencapsulated into billions of tiny capsules that are just a few microns in size. This encapsulation process offers some protection for the TLCs and maintains their thermochromic properties.

Then, these capsules are blended with other materials and used in products, such as room thermometers. Hang the thermometer in a bedroom and you'll see a rapid change in color that indicates an accurate temperature.

Temperature accuracy is a strong suit for TLCs. Their color consistency means they can indicate heat levels to within a few degrees. However, TLCs are a touchy technology. Their performance can suffer with repeated exposure to UV light, water and chemicals. What's more, they require specialized equipment for proper integration into various products, and that equipment (as well as the TLCs themselves) often adds significant expense to a manufacturer's production costs.

Leuco dyes and inks, though, are a different story. 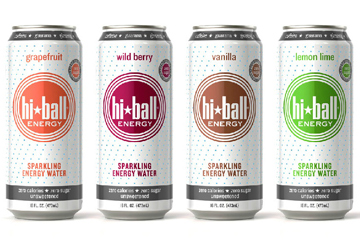 Liquid crystal-based TLCs are a temperamental bunch and rather difficult to incorporate into labels, clothes or other goods. Leuco dye inks, though, feature more durable chemistry that lets product designers employ these inks for all sorts of fun applications.

One of the most famous applications of leuco dyes is on cans of Coors Light beer. These cans feature a graphic of a mountain landscape next to the company's logo. At room temperature, the mountains appear white. Cool the can to drinking temperature (about 45 degrees Fahrenheit or 7 Celsius), though, and those same mountains turn a vivid, bright blue. As the beer warms in your hand, the graphic again shifts to its original white. This color change can happen over and over again.

As with TLCs, leuco dyes are also microencapsulated into tiny droplets that are only about 3 to 5 microns in size, which prevents them from reacting with or being damaged by other chemicals.

Usually, leuco dyes are colored when they're at a cool temperature. Then, as heat rises, they become translucent, which lets them reveal any colors, patterns or words that may be printed on an underlying layer of ink. In other products, leuco dyes can be blended with another color so that as temperatures change, a two-tone effect occurs. Mix blue with yellow, for example, and you have an ink that looks green at lower temperatures and yellow when heat rises.

It sounds a bit magical, but there's some basic science behind the way the inks work. The teensy capsules contain a colorant, an organic acid and a solvent. At lower temperatures the solvent remains in a solid state, keeping the colorant and acid in close proximity to each other -- and as a result, they reflect light and create color. As the solvent warms, the colorant and the acid separate and there's no visible color, which in turn exposes underlying inks.

Take your maple syrup bottle as an example. At room temperature, the bottle shows a picture of a tiny black microwave; when warmed, the black area fades, temporarily revealing the word "hot."

When it comes to temperature accuracy, leuco dyes are more ham-handed than TLCs, so you can't depend on them for applications where you really need a precise temperature reading. But leuco dyes can be integrated into all sorts of fascinating and amusing products. 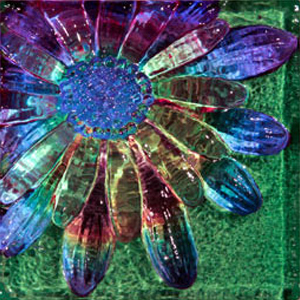 Makers of color-morphing products love thermochromic inks, but they have to choose these inks carefully to ensure that they'll work well in their current manufacturing processes. Usually, companies will acquire samples from ink suppliers and then follow a process of trial and error until the results are stable and visually mesmerizing.

Both types of thermochromic inks have pros and cons. Chemists must weigh the properties of each before choosing an ink that's best for their application.

The temperature range of thermochromic liquid crystals is around -22 to 194 degrees Fahrenheit (-30 to 90 Celsius). For the most vivid colors, they require a black background, and in part because of this, the best use of TLCs is in plastic products such as thermometers. Because they're water-based, these inks are harder to work with than leuco dyes.

Unlike TLCs, leuco dyes can be incorporated in a much broader range of products, so long as engineers keep temperature specifications in mind. With the right tweaking, the dyes are capable of shifting from one color to another in temperature ranges of 5 to 140 degrees Fahrenheit (-15 to 60 Celsius). Again, the point at which the transition happens isn't terribly accurate with leuco dyes, but it generally occurs within 6 to 18 degrees Fahrenheit (-14 to -7 degrees Celsius) of the intended temperature.

Leuco dyes are far sturdier than TLCs. Because of that, they're used in many kinds of inks, including water-, solvent-, epoxy-based inks and more. Their adaptability means they're integrated into all sorts of printing processes, such as screen, offset, gravure and others. You'll also find them in plastics, on metals and blended into a variety of paints.

Leuco dyes appear in a plethora of paper products as well, such as quirky, direct-mail advertisements and promotional materials. Security-minded products rely on leuco dyes, too, including prescription drug pads and check security features. Simply touch a temperature icon embedded in the document and its appearance will change, confirming its authenticity.

Thermochromic inks aren't currently used for hardcore security purposes. For example, they aren't great for preventing counterfeiting because the inks are available for purchase on the open market, meaning crooks could easily make their own temperature-sensitive cash. 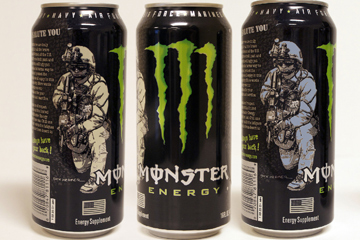 Leucodyes are often used in beverage can printing. Manufacturers use the flashy graphics to draw in new customers and develop brand loyalty.
Courtesy CTI Inks

Thermochromic inks are more expensive than regular inks, but they still find their way into innovative products, from clothes and cars to papers, paints and bathroom fixtures. Beer and energy drink companies are known for incorporating flashy, temperature-sensitive graphics into their products. Leuco dyes don't interfere with recycling, so they're environmentally sound, too.

A company called Moving Color makes color-changing tiles for home decorating. Install the tiles in your shower and watch as the black tile shifts to various bright hues. Or position them near lights and they'll change in response to heat from the bulbs.

Various manufacturers integrate leuco dyes into shirts, skirts and other clothing. Press your hand to these materials and that imprint will linger, offering a weirdly eye-catching appeal.

Some baby bottles employ these inks to indicate when they're hot. Plastic coffee cup lids can do the same. Both are visually appealing, but they serve a practical purpose as well. One company even makes a toilet seat that changes color when body heat is applied, so you'll know if someone has used that particular toilet very recently.

Added to wallpaper or wall paint, these inks hold all sorts of interior decorating potential. At the right temperature, for instance, those vines on your wallpaper would actually bloom into gorgeous pink flowers. If you have the dough, you can ante up for a color-changing paint job for your car, too.

The artistic and aesthetic appeal of these dynamic inks is endless. As chemists continue improving these inks, you can expect to see more and more products that incorporate them. And then you'll be able to upgrade many of the products you own to reflect just about any color of the rainbow.

Color isn't just a nice way to change the look of your kitchen. Color affects mood, serves as a powerful visual communicator, alters your physiology and basically plays a tremendous role in human life. Color is dynamic, fun and important.

Color-changing inks, then, are a fascinating study in both chemistry and psychology. If a fancy, candy-red blender can command a premium price, what kind of cash would you be willing to drop on one that changes color depending on whether you're blending hot soup or a frozen smoothie? And how much would you prefer wall paint that changes its hues depending on that day's thermostat setting?

The possibilities for these inks are getting broader by the day. Their future looks bright, and ours looks a lot more colorful.