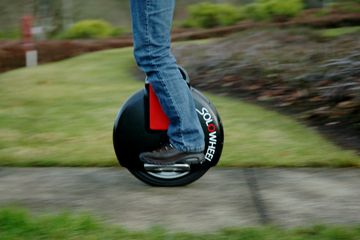 The Solowheel has a 1,000-watt electric motor that rotates the wheel, a lithium-ion battery that powers the electric motor and a gyroscope that helps the user stay balanced while moving.
Courtesy of Inventist/Solowheel

You've probably seen the comic strip "B.C." It's about a group of cartoon cavemen with suspiciously modern attitudes, one of whom is an inventor named Thor. And what has this inventor invented? The wheel, of course. Thor's wheel is carved out of stone and has a short axle that he can put his feet on, allowing him to stand on it and ride it over hills and through valleys, sort of like a modern motorist with a single-wheeled vehicle instead of a full-sized car.

Well, if history can repeat itself, so can prehistory, even comic strip prehistory. The Solowheel from Inventist, Inc. is simultaneously an advanced form of low-energy, zero-emission, ultra-portable transportation and a modern version of Thor's prehistoric wheel from "B.C." Not that self-balancing people movers are anything new, even in modern times. The best known product in this category is the Segway. The main difference between a Segway and a Solowheel is size. The Segway has two wheels and a long handle for the "driver" to hang on to. By contrast, the Solowheel is just what it sounds like -- a single wheel, but one with a small handle on top so that when you've finished using it for transportation, you can pick it up and carry it with you. If you're a student and you use it to get to class, you don't even need a parking space. You can just park it next to your desk. Or if you're a commuter and you use it to catch the bus, you don't have to attach it to the bike rack. You just carry it on with you. It's like a 25-lb. round suitcase with an electric motor and two small platforms on the sides to put your feet on.

Just don't expect to use it for long commutes without a bus or a train to help out. In its present incarnation the Solowheel has a top speed of about 12 miles per hour and runs on a battery that has a life, coincidentally, of about one hour at top speed travel. If you try to make a round trip of more than 12 miles, you could find yourself carrying the Solowheel home. So while it may have some practical uses, like making quick trips to the convenience store, the Solowheel is as much a toy as it is a commuter vehicle. It's perfect for rolling across the park on lazy weekends or just circling around the block, but not so perfect for long distance travel.

Still, prehistoric cartoon inventors notwithstanding, the Solowheel is an impressive piece of modern engineering. How exactly were the inventors at Inventist able to boil personal transportation down into something not much larger than a soccer ball? Let's take a look.

The people at Inventist, Inc., like to say that they've "reinvented the wheel," which isn't entirely true. Like every wheel ever made, the Solowheel is round and it rotates, allowing it to roll. There's nothing new about that. What Inventist has done differently is more in the way that the wheel is used than in the way it works. The Solowheel has a 1,000-watt electric motor that rotates the wheel, a lithium-ion battery that powers the electric motor and a gyroscope that helps the user stay balanced while moving. It also uses a power regeneration system that can recharge the battery using the kinetic energy of braking or gliding. This doesn't turn it into a perpetual motion machine, capable of recharging itself fully while it moves, but it can extend the life of the battery if you spend a lot of time riding it downhill or stopping at lights.

The Solowheel doesn't have much in the way of controls. In fact, it doesn't really have any at all. You start it by putting your feet on the small platforms extending to each side of the wheel, standing up, and leaning forward. You brake it by leaning backward. And you steer it by leaning sideways in the direction that you want to go. That's about as simple as walking and you barely have to move your legs (though Solowheel users say that balancing on it and steering for an hour can still give you an exhausting workout). When you're done with it, you can fold the foot platforms into the case surrounding the upper portion of the wheel and grab the handle on top to pick it up. The Solowheel recharges off normal current and a full charge takes about 45 minutes, so if you want to ride it the full 12 miles to work in the morning, you can have it charged and ready by afternoon to take you home again.

Is it easy to use? The people at Inventist say it is and they have videos of people happily gliding along on a Solowheel without falling down and breaking any delicate body parts. But the reviewers at Engadget say they had a little trouble getting balanced on it in the first place and have videos that show them not quite managing to get on board. Apparently, balancing on a wheel is a skill that takes time and practice to master, though the result could be worth it if you need a quick way to catch your commuter train. It's also fairly inexpensive, if not the cheapest form of transportation on the block -- that would be your feet, followed by a bicycle. And, it's convenient, cheap to run, easy to store and will get you lots of curious looks from bystanders.

And somewhere a cartoon caveman will be smiling at you while you ride.

I live in Los Angeles, a city widely known for its (over) reliance on automobiles. And yet the other day, while standing on a street corner near Hollywood, I saw a parade of people pass by on Segways, a vehicle you'd be unlikely to see on the famous network of LA freeways. It was oddly exciting to realize that, even here in the heart of automobile land, there were people looking for simpler, less environmentally damaging ways to get around. It's also nice to see that there are companies, like Segway and Inventist, that are committed to developing alternatives to cars. Not that I'm knocking automobiles -- I drive a Prius myself when I'm not walking or on my bicycle -- but cars aren't always the most appropriate form of transportation. If all you need is a vehicle that will take you a few miles without a passenger in tow, consider a less powerful alternative, be it a bicycle, a Segway -- or a Solowheel. You'll be healthier for it and the earth will be a better place. And those LA freeways will be a lot less clogged with traffic when I get on them with my Prius.