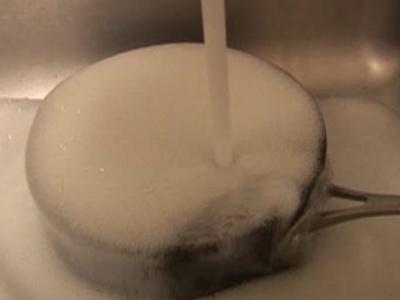 Ever wondered how soap gets things clean and how it can prevent us from getting sick? Discovery News' Kasey-Dee Gardner scrubs in to find the answer.
Discovery

It might sound like a novelty out of the pages of Archie McPhee -- or the worst supervillain plot ever to sully the pages of Bond or Batman -- but magnetic soap is attracting a lot of attention.

On Jan. 20, 2012, a University of Bristol team led by Julian Eastoe published a paper online announcing a simple idea with far-reaching implications: soaps that can be moved or removed using magnetism. To see why this idea has such pull, imagine cleaning up an environmental disaster like the Deepwater Horizon oil spill, then sweeping up the leftovers with magnetic booms to ensure that no oil-dispersing substances, or dispersants, remain behind.

Because cleansers can linger or spread, inflicting their own brand of harm, mopping up industrial spills has long meant picking your poison. Oil cleanup crews use dispersants to save otters and seabirds from immediate hazards but risk damaging sea life, particularly fish eggs, in the process [source: Sohn].

From an environmental standpoint, that won't wash, so researchers have worked themselves into a lather trying to pump out soaps and dispersants that can be easily removed from the ecosystem, or that will break down on their own if left behind [source: Boyle]. Over the years, they have spun out soaps that react to pH, electrolyte concentration, temperature, carbon dioxide and light [sources: Brown; Flatow]. Altering the temperature of water requires beaucoup energy, however, and changing a substance's internal chemistry remains quite difficult -- to say nothing of the potential environmental consequences of doing either [source: Eastoe].

Now, magnetic soap has joined the load of novel cleaners. Although still in the early stages of experimentation and development, it could one day bring a breath of springtime-fresh air to notoriously sticky cleaning jobs [source: Flatow]. Currently, we rely on the normal detergent action of soaps like Dawn, which might "take grease out of your way" but can only do so much for oil-soaked otters [source: Drury]. Magnetic soaps can grab ahold of oil and then overcome both gravity and surface tension to stick to magnets.

The technique applies not only to soaps, but also to a broad and ubiquitous class of substances called surfactants, or "surface active agents," that convince typically standoffish solids and liquids, such as oil and water or water and dirt, to mix. Equally important, they hold onto removed dirt, preventing it from clumping up and redispersing on washables. Surfactants play essential roles in tanning and dying, perfumes and beauty products, and cooking and baking.

As in any good social event, successful mixing comes from lowering tensions through good chemistry.

The Secret Lives of Soaps

Soaps are molecules in the throes of an identity crisis -- namely, a love-hate relationship with water. One part of the molecule, the ionic hydrophilic end, longs for water's clean embrace; but the other side -- the unseemly, scandalously organic hydrophobic end -- feels more at home with a filthier element. Word on the street is, it shamelessly bonds with grease, oil and dirt.

When you squirt dish soap into greasy water, surfactant molecules surround the droplets of grease, with the water-loving ends facing outward in a kind of reverse huddle while the water-hating ends face inward in a rugby scrum.

Left to its own devices, grease would clump up with its oily friends, undergo a falling out with water and redeposit. Water, preferring its own kind to this unsavory element, would help by pushing it out via surface tension. Soaps, by grabbing gunk in a molecular bear hug, prevent this from happening so that water can wash the dirt away.

In principle, magnetic soap sounds like a simple idea: You just take some detergent and mix in some magnetic metals, right? Well, not so fast. Until recently, scientists thought that such metal ions would end up isolated in the mixture. Since individual ions aren't magnetic, this would render their contribution moot [source: Danigelis].

But then the Bristol researchers discovered something interesting: As they added their iron-containing surfactants to the solution, the minuscule clumps organized, creating an iron core that magnetic fields could get a grip on [sources: Hadlington; University of Bristol]. Eastoe and his team made the switch using iron salts that contained bromine and chlorine ions, like those found in mouthwash and fabric softener [sources: Drury; Roach; Brown].

Lab tests reveal that the magnetized soaps remove soil just as effectively as unmagnetized ones [source: Eastoe]. The researchers also found that magnet fields could change the soap's electrical conductivity and melting point. Usually, science and industry manipulate these aspects by adding an electrical charge to the soap, or by altering the system's pH, temperature or pressure [sources: Danigelis; Roach; Solon].

Because the magnetic soap consists of common chemicals, it makes an attractive and cheap candidate for scaling up -- which could speed its journey from the lab to industry, perhaps in the form of water-treatment or industrial-cleaning products [source: Flatow; Solon]. One day, it might even make it into the home.

Eastoe and his team are already looking beyond their iron salts toward potentially more promising ionic replacements. They have begun applying the technique to biological macromolecules, amino acids and proteins [source: Eastoe]. Several industry groups, including pharmaceutical companies, have expressed interest in the magnetic surfactants as well [sources: Drury; Eastoe].

Now that the results have been published, and magnetic soaps are in the hands of the broader scientific community, who knows what innovations might bubble up?

I'm Getting a Little Emulsional

A common example of surfactants in action are emulsions, mixtures in which one liquid (or solid) becomes distributed throughout the other as tiny, stable droplets, or micelles. For examples of emulsions, raid your fridge for some milk (fat droplets dispersed in an aqueous solution), butter (droplets of an aqueous solution in fat) or mayonnaise (an emulsion of raw egg yolks and vegetable oil).

Many emulsions, like vinaigrette dressing, are unstable: Given time, they will separate. Add some energy -- in this case, shaking -- and it's good as new. Another energetic process, called homogenization, keeps milk fat from separating out and forming a cream layer.

We never can tell where inventions will ultimately take us, or how their intended purposes might later be eclipsed by other applications. When the first lasers were built in 1960, no one quite knew what to do with them. Today, there are more than a score of laser types, with applications in medicine, skin treatment, electronics, industry, communications and scientific research and measurement. Liquid crystals were discovered in 1888, but no one really figured out what to do with them until the 1960s.

Even the most novel and promising technologies can be relegated to the dustbin of history by later developments. Still, some stick around. CDs and digital music have yet to completely kill off vinyl and, despite transistors, vacuum tubes still survive in guitar amplifiers.

Will magnetic soaps be the next big thing, or will they end up another washout? I suspect the former, if only because of the ubiquity of surfactants in nature and in industry -- and the importance of surface tension in chemistry and biology. The question is, will it be magnetic soap our children use or some strange offshoot, such as a three-dimensional video system made up of luminescent suspended colloids in a magnetic bottle?

Are nanomaterials dangerous?
How does faxing over e-mail work?
How Global Cell Phones Work