How to Hack Your Lantern Flashlight to Keep Going and Going and... 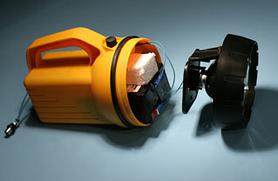 If you have a lantern flashlight, you probably know about the enormous batteries they require. An you probably also know...they aren't rechargeable.

The Steampunk Workshop has a great tutorial on how to switch your lantern flashlight from sucking up the juice of expensive lantern batteries to running off batteries that can be charged again and again, saving money and sparing the planet more e-waste

Rather than the regular lantern battery, there are similarly sized 4Ah 6 volt rechargeable lead acid batteries available from Home Depot. By doing a bit of quick rewiring within the flashlight, you can swap out the batteries. And by repurposing an old charger that can provide about 250 ma when connected to the battery and plugged in, you'll have a lantern that can be fully recharged in about 20 hours. The project will pay for itself in just a handful of charges.

The project proves there are ways to green up just about anything you own, if you are willing to cut it open and mess with the guts a little.