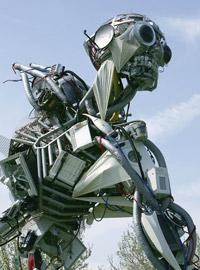 ­Think back ­for a minute at the procession of computers, TVs, cell phones, radios, game consoles and music players that have passed through your hands over the years. What about the endless stream of products such as vacuum cleaners, microwaves, hair dryers, electric toothbrushes, alarm clocks, lamps, lawn mowers and smoke detectors that have come in and out of your life?

These are just a few examples of devices that are part of the growing phenomenon known as e-waste. E-waste is the term used to describe discarded electronics and electrical products. In the past few decades, the world's demand for gadgetry has gone through the roof and, inevitably, more waste has started to accumulate. As the bustling economies of China and India modernize and follow more Western trends, the worldwide generation of e-waste has hit astronomical proportions.

So what happens to all that e-waste? E-waste contains a bonanza of toxic and hazardous components that, for the most part, are currently being shunted into landfills. Much of the remaining portion is exported to developing nations, where many laborers, working under unsafe, unregulated conditions, recycle this e-waste. The work these laborers do, while it does provide some raw materials that can be reused, comes with some serious consequences.

Workers in Lagos, Nigeria, unload imported TVs and PC monitors, most of which will be sent to the local dumps. From there, they will be scavenged for recycling and then burned. ­
Photo courtesy Basel Action Network 2006

At present, we're just beginning to realize how serious those consequences are. Long-term exposure to small doses of toxins is less understood than the effects of those toxins in larger doses. In all likelihood, it's dangerous to spend your days touching fragments of toxic metals like lead and mercury. Common sense implies that inhaling the fumes from flame-retardant chemicals and highly corrosive acids isn't a good idea. And dumping byproducts of this recycling process into drinking-water sources can't be good for anyone.

The upshot is people have begun taking notice of these conditions, and several initiatives to protect the environment and human health have gained traction recently. Governments from around the world are passing regulations to curtail e-waste, and an increasing number of industrial improvements pop up every day.

On the next page, we'll look at what exactly is in e-waste that makes it so hazardous and why your old toaster isn't trying to kill you (well, at least not on purpose). 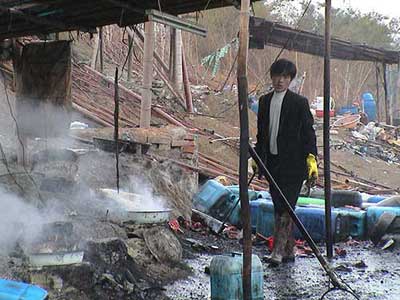 A man in Guiyu, China, heats a combination of nitric and hydrochloric acid, while inhaling acid fumes, chlorine and sulfur dioxide, without respiratory protection. Leftover acids and sludge are dumped in the river.
Photo courtesy Basel Action Network 2001

In many instances, the only visible part of an electronic product is its outer shell. Unless that casing is broken, we rarely see the myriad circuit boards, wiring and electrical connections that make the device actually function.

But it's those inner mechanical organs that are so valuable and so toxic. A whole bouquet of heavy metals, semimetals and other chemical compounds lurk inside your seemingly innocent laptop or TV. E-waste dangers stem from ingredients such as lead, mercury, arsenic, cadmium, copper, beryllium, barium, chromium, nickel, zinc, silver and gold. Many of these elements are used in circuit boards and comprise electrical parts such as computer chips, monitors and wiring. Also, many electrical products include various flame-retardant chemicals that might pose potential health risks. To learn more about the dangers of a common toxic component like lead, read Why do CRTs contain lead?

When these elements are safely encased in our refrigerators and laptops, e-waste dangers aren't much of an issue. Problems can occur when devices break -- intentionally or accidentally. Then they can leak and contaminate their immediate environment, whether that's in a landfill or on the streets within a region full of struggling laborers. Over time, the toxic chemicals of a landfill's e-waste can seep into the ground (possibly entering the water supply) or escape into the atmosphere, affecting the health of nearby communities. As we discussed on the previous page, the jury is still out on the danger level of this e-waste contamination, but it's safe to assume that the results are probably not good.

People are beginning to discuss the serious aspects of this pollution in terms of bioaccumulation and biomagnification. Bioaccumulation occurs when people, plants and animals build up levels of toxic substances in their bodies faster than they can get rid of them. Biomagnification occurs when toxin levels accumulate within the food chain. For example, plankton might absorb low levels of mercury. Then fish that eat large amounts of plankton ingest an even larger, unhealthier dose. The problem continues as birds or humans eat the mercury-tainted fish.

Researchers in the Dartmouth Toxic Metals Research Program have compiled a list of the effects that some of these toxins take on the human body. Keep in mind this is not an exhaustive list of all the suspected health effects of these metals. Also, this list mentions only some of the chemicals and compounds used in household products.

Now that we know about the dangerous parts lurking behind our computer screens and favorite electronics, let's focus on what's being done to address the issue of e-waste. 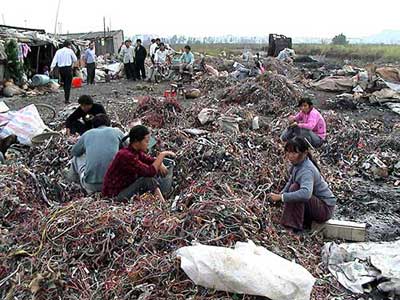 Women in Guiyu, China, sort wire that has been torn from discarded computers. The wires are sorted during the day and burned at night, releasing carcinogenic hydrocarbons and dioxins near areas where many families live.
Photo courtesy Basel Action Network 2001

If you don't want to damage the environment, are you supposed to transform your storage closet into an electronics graveyard? Never fear, the slow but steady mechanisms of social consciousness have been grinding at this one for a while now, and movement is starting to happen. Input about e-waste regulations are coming from a number of fronts, including grassroots organizations, governing bodies and industrial leaders.

Many organizations have recognized the potential for e-waste dangers for years. However, the issue recently came to the forefront of media in 2002, when Basel Action Network's (BAN) documentary "Exporting Harm" was released. BAN works to reduce the harmful effects of exporting e-waste and promotes sustainable solutions to worldwide waste issues. So-called recyclers and scrap brokers were buying e-waste from developed regions throughout the world and dumping it in developing nations. In some parts of these countries, people were dismantling electronics on street corners, instead of in recycling facilities.

Picture something like this: Mountains of discarded TVs and computer monitors tower above the rutted streets of a low-income urban community. In order to make a living, hundreds of people work in the shadow of this heap of e-waste. Some people tend fires which burn and remove the plastic from copper wires, putting out billows of noxious smoke. Other workers swirl circuit boards in tubs of nitric and hydrochloric acid to release the solder and precious metals -- at the same time releasing gas that stings their eyes. Plastic chips, obtained from smashing devices like keyboards and computer casings, are broken into tiny pieces and carefully sorted before they too are burned and melted together into a sellable chunk. And at the end of the day, all the byproducts that have no further useful purposes, like charred circuit boards and used acid compounds, usually are dumped in open fields and rivers or are burned.

These are a few examples of the recycling processes that still occur on a daily basis in some developing regions. But, as mentioned earlier, many countries are passing new laws to try to halt the process and fix the problem.

For example, the European Union has a series of directives and regulations aimed to increase the recovery, reuse and recycling of e-waste and put the burden of recycling on the manufacturer. The hope is that this will decrease e-waste and e-waste exports, and encourage manufacturers to create new, greener products. Ideally, these products would be safer and easier to upgrade, fix and recycle. The EU has also increased the regulations on different substances common in e-waste, limited the use of these substances in member countries and banned the exportation of hazardous waste.

Some critics say the EU directives aren't limited enough, while other critics say they are too limiting. Still others criticize and fault U.S. policymakers, who haven't passed any substantial legislation to tackle the issue of e-waste. A handful of U.S. states have enacted their own e-waste legislation and many more are now addressing the issue. Countries like Japan and China are also jumping on the bandwagon. The Chinese laws regarding e-waste are similar to the ones in the EU, and they focus on banning the import of e-waste (although illegal smuggling still occurs). Nations targeted for e-waste shipments, like India, have some e-waste regulations in place, but advocates are pushing for an increase.

So starting to feel a little uneasy about your current role in all this? Wondering what can you do to help ease the burden of e-waste? Read the next page to find out. 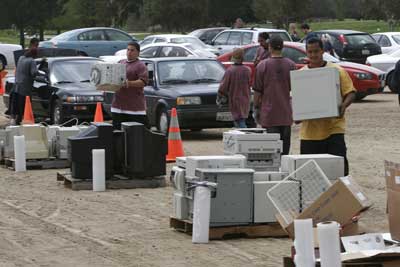 Don't let your storage closets and garages become electronic burial grounds. Visit the links on the next page for more information about e-waste and legitimate recycling.

What if I accidentally zapped someone with my stun gun?
Consumer Electronics Show 2007
How to Know What F-Stop to Use