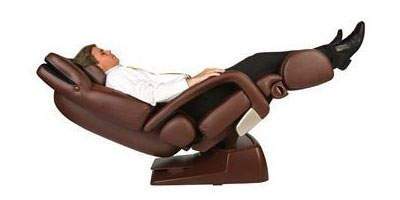 It's story time! Imagine a weary, aching journalist walking through an enormous showroom at the 2008 Consumer Electronics Showcase in Las Vegas. This poor fellow spent the last several hours looking at countless gadgets and displays. By the end of the day, the writer just wants to get back to a hotel room and collapse. But then something catches his eye. It's the Human Touch HT-7450 Zero-Gravity Massage Chair, a recipient of a 2008 Innovations Design and Engineering award.

Being a dedicated journalist, the writer knew it would be irresponsible to leave the showroom floor without giving this machine a thorough test run. So he set down a bag of press kits, removed his shoes and took a seat on the award-winning chair. His legs snuggled into two concave indentations on the leg rest. His head settled against a cushioned head rest. A helpful booth attendant gave him a smile and pressed a button on a remote control. The chair immediately began to recline.

Users can control the HT-7450 with a remote control.
Courtesy Amazon

And it continued to recline until the writer's legs were higher than his torso. He experienced an odd sensation -- it felt almost as if the chair would dump him on his head. Perhaps he had fallen prey to some sort of torture device designed to punish weary convention visitors. But worries soon melted away. And along with them went the tension and stiffness accumulated after walking for miles along aisles of electronics.

The massage chair used rollers, air bags, heat pads and vibrating surfaces to ease his aches and pains. The massage routine lasted for several minutes before returning him to an upright (but very relaxed) position. The journalist put his shoes back on, picked up his bag of press kits and made his way back to his hotel.

While Human Touch says the HT-7450 as the world's first zero-gravity massage chair, other manufacturers offer their own zero-gravity models. But what is it that makes these massage chairs zero-gravity? Do they hover? Do they provide the user with a sense of weightlessness? Is it just a clever marketing gimmick? We'll find out in the next section.

The Cost of Comfort

Human Touch lists the suggested retail price for the HT-7450 as $3,999. The Zero Gravity Massage Chair from Sanyo will cost you $4,999. It seems relaxation isn't cheap.