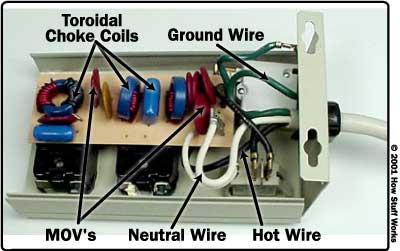 Inside a surge protector with line-conditioning chokes

Another common surge protection device is a gas discharge arrestor, or gas tube. These tubes do the same job as an MOV -- they divert the extra current from the hot line to the ground line. They do this by using an inert gas as the conductor between the two lines.

Both of these methods have a parallel circuit design -- the extra voltage is fed away from the standard path to another circuit. A few surge protector products suppress surges with a series circuit design -- the extra electricity isn't shunted to another line, but instead is slowed on its way through the hot line. Basically, these suppressors detect when there is high voltage and then store the electricity, releasing it gradually. The companies that make this type of protector argue that the method offers better protection because it reacts more quickly and doesn't dump electricity in the ground line, possibly disrupting the building's electrical system.

As a backup, some surge protectors also have a built-in fuse. A fuse is a resistor that can easily conduct current as long as the current is below a certain level. If the current increases above the acceptable level, the heat caused by the resistance burns the fuse, thereby cutting off the circuit. If the MOV doesn't stop the power surge, the extra current will burn the fuse, saving the connected machine. This fuse only works once, as it is destroyed in the process.

Some surge protectors have a line-conditioning system for filtering out "line noise," smaller fluctuations in electrical current. Basic surge protectors with line-conditioning use a fairly simple system. On its way to the power strip outlet, the hot wire passes through a toroidal choke coil. The choke is a just ring of magnetic material, wrapped with wire -- a basic electromagnet. The ups and downs of the passing current in the hot wire charge the electromagnet, causing it to emit electromagnetic forces that smooth out the small increases and decreases in current. This "conditioned" current is more stable, and so easier on your computer (or other electronic device).