What's in the Frame 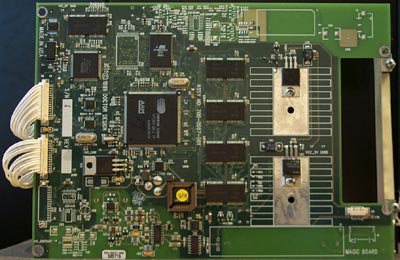 This circuit card contains all of the components that drive the digital picture frame.
Photo courtesy Ceiva

The frame is actually a very simple computer. It has most of the same components as the computer on your desktop, but they're a lot simpler in the frame because they only have to perform a single task.

The central processing unit (CPU) in the Ceiva digital picture frame is similar to the kind used in small, electronic handheld games. The most processor-intensive task performed by this CPU is downloading pictures from the Web site. The rest of the time, it doesn't break a sweat.

The frame has some ROM memory to store the operating system. It also has some Flash memory, which is where the pictures, settings and some of the operating software live. Both types of memory are persistent -- no data is lost if the unit is unplugged.

The frame has a 33.6-Kbps modem, which it uses to connect to the Internet and download the new photos you post.

The display is a 640x480-pixel, passive-matrix liquid crystal display (LCD) with a viewing area of about 5 by 7 inches (13 by 18 cm). This type of display is thin enough that the digital frame isn't much thicker than an ordinary picture frame. The pictures are displayed in 12-bit color, which means that approximately 4,100 different colors can be presented on the screen.

The only user-operated controls on the frame are a black button, which adjusts the brightness of the display, and a white button that turns the frame on when the user first plugs it in and can also be used to manually dial in.

Let's take a look at how the Ceiva frame works.