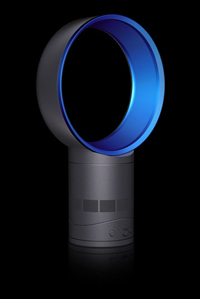 In October 2009, James Dyson's consumer electronics company, famous for its line of vacuum cleaners, introduced a new device to the market called the Dyson Air Multiplier. The Air Multiplier is a fan with an unusual characteristic: It doesn't have any visible blades. It appears to be a circular tube mounted on a pedestal. The shallow tube is only a few inches deep.

Looking at the device, you wouldn't expect to feel a breeze coming from the mounted circle. There are no moving parts in sight. But if the fan is switched on, you'll feel air blowing through the tube. How does it work? How can an open circle push air into a breeze without fan blades?

As you might imagine, there are a few scientific principles at play here. There's also an electronic element. While the tube doesn't have any blades inside it, the pedestal of the fan contains a brushless electric motor that takes in air and feeds it into the circular tube. Air flows along the inside of the device until it reaches a slit inside the tube. This provides the basic airflow that creates the breeze you'd feel if you stood in front of the fan.

According to Dyson, the breeze generated by the Air Multiplier is more consistent and steady than one from a standard fan with blades. Since there are no rotating blades, the breeze from the fan doesn't buffet you with short gusts of air.

What's the secret behind the technology?

The Mechanics of the Air Multiplier

Calling the Dyson Air Multiplier a fan with no blades is perhaps a touch misleading. There are blades in the fan -- you just can't see them because they're hidden in the pedestal. A motor rotates nine asymmetrically aligned blades to pull air into the device. According to Dyson, these blades can pull in up to 5.28 gallons (about 20 liters) of air per second.

The air flows through a channel in the pedestal up to the tube, which is hollow. The interior of the tube acts like a ramp. Air flows along the ramp, which curves around and ends in slits in the back of the fan. Then, the air flows along the surface of the inside of the tube and out toward the front of the fan. But how does the fan multiply the amount of air coming into the pedestal of the device?

Air surrounding the edges of the fan will also begin to flow in the direction of the breeze. This process is called entrainment. Through inducement and entrainment, Dyson claims the Air Multiplier increases the output of airflow by 15 times the amount it takes in through the pedestal's motor.

Yet there's one problem that Dyson didn't quite overcome with its newfangled fan. On the next page you'll see why Dyson changed the design of its Multiplier when it came time to make a second version. 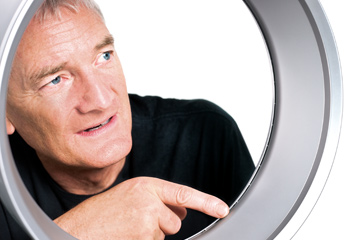 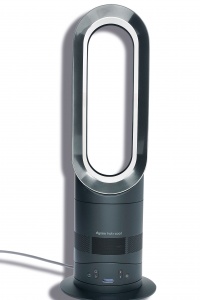