Your Jeans Could Someday Power Your Phone

by Melanie Radzicki McManus Oct 5, 2016
One day your pocket might power your smartphone Sviatlana Zhukava/Getty Images

Soon you may never have to fret about your smartphone running out of juice. Your clothing will simply power it back up for you. That's the word from scientists at China's Chongqing and Jinan Universities in a study just published in the journal ACS Nano.

Researchers have been hard at work during the last few years trying to create wearable energy, or clothes that can charge things. The premise is simple. People today rely heavily upon devices such as smartphones and tablets. And they're looking for ways to recharge these devices on the go. So if you could devise clothing fabric that could harness solar power —one of the most widely available and inexhaustible renewable energy sources — you'd be able to charge your various gadgets with ease.

Scientists have had some past success creating energy-harvesting fibers. But there was always one problem when they tried to fashion these threads into self-powered smart garments: The fibers they devised got wrecked during the clothing manufacturing process, namely during the weaving and cutting. The Chongqing and Jinan University scientists say they've solved this problem because the energy-collecting and energy-storing threads they created are highly flexible — each individual thread is easily bendable, and not simply the fabric as a whole.

The researchers created a fiber containing titanium or a manganese-coated polymer, zinc oxide, a dye and an electrolyte, laced with copper-coated polymer wires to make the solar cell part of the textile. To store the power, they developed a second fiber which contained titanium, titanium nitride, a thin shell to prevent oxidation and an electrolyte. These two fibers were woven with cotton yarn.

The team's sample textile can be fully charged to 1.2 volts in 17 seconds by exposure to sunlight — enough voltage that your future smart T or smart dress might be able to power small electronics. It's sturdy, too; their research showed there was no degradation in the fabric after 60 days. But don't worry that this means the fabric is akin to sackcloth. The scientists note their textile can be fashioned into numerous different patterns, and tailored into any designed shape, without affecting performance.

Now That's Interesting
Nanoparticles are the reason your jeans may soon power your phone. These microscopic bits, which can be used to coat fibers, range in diameter from 1 to 100 nanometers -- one nanometer is a billionth of a meter -- so they're exceptionally small. But they're not new. When the earth was forming, nanoparticles were shot into the atmosphere via volcanic eruption and sea spray.

Will Nissan's New Self-Driving Chair Usher in a Golden Age of Sloth? 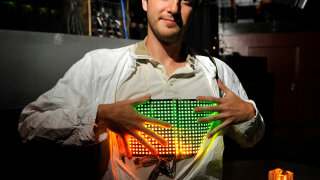 Wearable Tech for Pets: A Whole New Way to Call Your Dog