Other Advances in TV on the Horizon 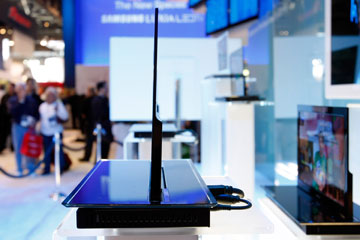 A side view of a 2009 prototype Samsung active matrix OLED. So slim!
Ethan Miller/Getty Images

OLEDs have been used in phones and other devices for a while, and the first OLED TVs first hit the market back in the mid-2000s in Japan. But the early models had tiny screens and were extremely expensive -- a 15-inch (38-centimeter) model made by Korean electronics giant LG cost a princely $2,700, for example. One big obstacle was that manufacturing really big OLEDs was tricky. Additionally, early versions of the panels were more vulnerable than conventional flat-panel TVs to moisture, and TV makers didn't want to have hordes of angry consumers stomping into big-box stores to complain that their new sets had gone on the fritz [source: Kanellos].

The holdup in getting OLEDs to market has led some consumer electronics analysts to cast a skeptical eye on the big-screen OLED TVs that manufacturers such as Samsung have displayed at industry trade shows in recent years. One writer, The Verge's Vlad Sarov, has even called the technology "hype-emitting diodes" [source: Sarov].

Additionally, a few electronics manufacturers also have developed transparent displays using older liquid crystal diode (LCD) technology. Samsung, for example, actually has designed a clear window for a house that can double as a TV screen. The window-screen is illuminated by sunlight (or on a cloudy day or at night, by light generated from solar-powered batteries). That means that it can be much thinner than a conventional LCD screen [source: Heimbuch].

Further ahead, we'll probably see even more amazing advances in TVs. For example, we may have OLED screens that are so thin and flexible you'll be able roll them up and stick them in a closet -- or even in your pocket -- when you're not watching [source: Owen].