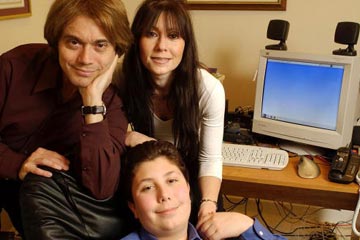 The Jacobs family of Boca Raton, Fla. served as early subjects for VeriChip implants. In 2002, Jeffrey, Leslie and their son Derek were chipped.
David Friedman/Getty Images

RFID pet recovery systems rely on tiny microchips the size of a grain of rice that contains the pet owner's contact information and sometimes an animal's medical history. Veterinarians scan lost pets with an RFID reader to determine whether or not the pet has a microchip. But the system can break down here. There are many competing pet recovery systems and consequently, many pet microchips. The Humane Society of the United States has been campaigning for development of a universal RFID reader that vets could use to read a pet's microchip, no matter its manufacturer or year of manufacture. In November 2005, President George Bush signed a bill for the standardization of pet microchips and a national database of pet owner information [source: RFID Journal].

Even though the FDA approved the implantation of RFID microchips in animals and humans in 2004, research from as far back as 1996 shows that these implants can cause cancerous tumors in lab rats and mice [source: Washington Post]. Specifically, the implants caused sarcomas, which affect body tissue. No studies have proven yet that cancer can form in animals other than lab rats and mice, and it's still too early to tell what effects the chips can have on humans. No negative health effects have been linked to the radio waves emanating from RFID chips. Despite this evidence, or lack thereof, other disadvantages of human chipping may outweigh its advantages.

VeriChip Corp. is leading the human chipping business. The company makes microchips with unique identification numbers that link to a VeriChip medical database. The VeriChip database contains emergency contact information and medical histories. Patients with serious medical issues like Alzheimer's are ideal candidates for the VeriChip. In addition to a one-time implantation fee, VeriChip charges annual fees based on how much information you want in the database -- you can choose to have just your name and contact information or your full medical history. VeriChip is still growing, so there are not RFID readers in every hospital. Also, doctors might not scan every patient to check for a chip, so depending on the hospital or doctor, your VeriChip could prove useless.­

­­One VeriChip with greater rates of success is the Hugs Infant Protection Program. Under this RFID monitoring system, newborns in some hospital nurseries wear ankle bracelets with RFID chips. If an unauthorized person tries to remove a baby from the hospital, an alarm is sounded at the nurses' station and at exit doors. You can read more about successful infant abduction prevention on the VeriChip Web site.

In the next section, we'll hear what RFID critics have to say about tracking devices in our modern world.

One researcher has developed an RFID system that monitors a baby's carbon dioxide levels in order to prevent sudden infant death syndrome (SIDS). Under this system, sensors attached to a crib sound an alert if they detect that the baby has stopped breathing, potentially saving young lives. Read more about this SIDS prevention system in the RFID Journal.­