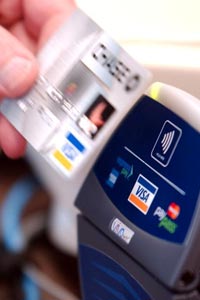 Chase's Blink technology uses an RFID chip embedded in the card to process transactions with the mere wave of the hand.
Thomas Cooper/Getty Images

NFC technology is promising because it presents the next evolution of convenient payment with an added layer of security. Some credit cards have NFC chips embedded in them and can be tapped against NFC payment terminals instead of swiped, which eliminates the possibility that someone could skim your data via the magnetic strip. This same system works with cellular phones, too: read up on how cellular electronic payments work to dig into the technology.

Google is one company pushing NFC payments with Google Wallet. The application stores credit card information under multiple layers of security and allows for quick tap payments at NFC terminals. That means the technology's usefulness is limited by the number of NFC payment terminals available in retail locations and the number of phones that support the technology -- at launch, Google Wallet only works with the Android Nexus S smart phone.

So what does this have to do with RFID? Near Field Communication devices can read passive RFID tags and extract the information stored in them. This technology is being used in modern advertising. For example, picture a normal poster advertising a pair of jeans, the kind of paper you'd see plastered on a wall in a shopping mall. Advertisers can make "smart" posters with RFID tags that add a new level of interaction with customers. Tap an NFC phone against a "smart" poster equipped with an RFID tag, and you may get a 10 percent off coupon for those jeans at Macy's. Passive RFID tags are cheap enough to be used in promotional materials just to engage customers.

NFC and RFID technologies have huge futures ahead of them in the retail world, but security remains a common concern. Some critics find the idea of merchandisers tracking and recording purchases to be alarming. Retail isn't the only industry using RFID technology: In the next section, we'll learn how the government is putting RFID tags to use.­