RFID Tags Past and Present 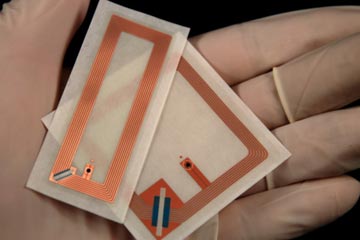 RFID tags like these used to be made only for tracking luggage and large parcels.
Thinkstock/Hemera/Thinkstock

RFID technology has been around since 1970, but until recently, it has been too expensive to use on a large scale. Originally, RFID tags were used to track large items, like cows, railroad cars and airline luggage, that were shipped over long distances. These original tags, called inductively coupled RFID tags, were complex systems of metal coils, antennae and glass.

Capacitively coupled tags were created next in an attempt to lower the technology's cost. These were meant to be disposable tags that could be applied to less expensive merchandise and made as universal as bar codes. Capacitively coupled tags used conductive carbon ink instead of metal coils to transmit data. The ink was printed on paper labels and scanned by readers. Motorola's BiStatix RFID tags were the frontrunners in this technology. They used a silicon chip that was only 3millimeters wide and stored 96 bits of information. This technology didn't catch on with retailers, and BiStatix was shut down in 2001 [source: RFID Journal].

Newer innovations in the RFID industry include active, semi-active and passive RFID tags. These tags can store up to 2 kilobytes of data and are composed of a microchip, antenna and, in the case of active and semi-passive tags, a battery. The tag's components are enclosed within plastic, silicon or sometimes glass.

At a basic level, each tag works in the same way:

Inductively coupled and capacitively coupled RFID tags aren't used as commonly today because they are expensive and bulky. In the next section, we'll learn more about active, semi-passive and passive RFID tags.