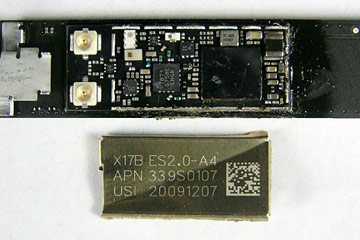 These are the iPad's WiFi and Bluetooth transceivers with the shielding removed.
U.S. Federal Communications Commission

Every iPad has WiFi, but Apple also sells versions of the iPad with 3G and LTE wireless capabilities. The cellular models are more expensive, and you'll also have to pay a carrier to use data on their network. In the United States, Apple partnered with AT&T and Verizon to offer 3G data for the iPad 2. When they released the third generation iPad with a Retina display, they also added 4G LTE support. AT&T, Sprint and Verizon all partnered with Apple to carry that device.

The WiFi models work much the same way a notebook or netbook computer works. The devices communicate with a wireless Internet connection via built-in WiFi. You would be subject to the same Wi-Fi hotspot limitations with this iPad model as you would a notebook computer. The WiFi plus 3G model allows you more freedom to browse the Internet and check e-mail. By utilizing similar wireless and cellular technology found in the iPhone, you can tap into the Internet using 3G service, but it'll cost you. If you go this route, not only will you pay a higher price for the 3G-enabled device, you'll need to purchase a data plan through AT&T or Verizon.

Since January 2010, Apple has released four iterations of the iPad. The fourth generation system notably added a faster processor and replaced Apple's 30-pin dock connector with a new port that it calls Lightning. The much smaller Lightning port was introduced in the iPhone 5 in fall 2012. Otherwise, it's identical to the third generation system which added the Retina display -- commonly called "the new iPad" in Apple's marketing. Both "the new iPad" and the original iPad from 2010 have been discontinued, but the iPad 2 is still on sale. It's cheaper, priced at $400, and lighter than the fourth generation iPad. It's lighter because it has a much smaller battery -- Apple had to nearly double the capacity of its battery to support the demanding high resolution screen.

Apple lists a comparison of all currently available iPad models on its Web site. Here are the most important distinctions: The iPad 2 is cheaper and lighter than the iPad with Retina display, but has a lower resolution screen, lower resolution cameras and an older processor. It also uses the 30-pin dock connector, and its cellular model does not support LTE. The newer iPad has the same battery life, supports Siri, has the new Lightning connector, can shoot 1080p video and has a 720p webcam. Most importantly, its A6X processor includes a quad-core graphics chip, making it the most powerful mobile system-on-a-chip around as of late 2012.

As someone who follows along with tech news on a daily basis, it's easy to forget how quickly technology changes. In refreshing HowStuffWorks' guide to the iPad, everything I read felt incredibly dated -- when, in reality, the iPad has only been around since 2010! There was no market for tablets until Apple released the iPad, and now there are hundreds of devices out there. The iPad's high resolution display is also pushing forward the next generation of LCD displays. It's also making Apple tons of money. No matter how you look at it, the iPad is a smashing success. -- WF