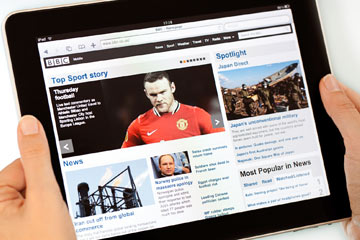 Web browsing. E-mail. Social media. These are the three pillars of the iPad: According to a 2012 study, most people spend their iPad time on those activities [source: Business Insider]. Of course, Web browsing is a huge category. That can include reading up on news, browsing blogs, reading long articles, or looking at pictures of cats. Social media includes services like Facebook and Twitter and chatting with friends via instant messaging.

If you think about it, these uses make sense. The iPad's touchscreen isn't the ideal format for doing lots and lots of typing, but it's fine in short bursts, and some people use the tablet in combination with a keyboard attachment. Web browsing dominates nearly 40 percent of iPad use, while e-mailing and social media take up the next 20 percent. Games and video watching each get around 12 percent. Many people use their iPads while in bed or on the couch. It often becomes a secondary media device -- a way to catch up on Facebook and Twitter while watching TV.

Apple's iBooks and the Amazon Kindle app both provide access to large libraries of books. Many people use the iPad as an e-book reader. Other services, like Instapaper, are designed with devices like the iPad in mind. Instapaper allows you to save Web pages for later reading and strip them down to a simple, easy-to-read text layout.

The iPad and other tablets have dramatically affected Web design since 2010. More sites are being built to look great on tablets and mobile devices, and the concept of separate mobile sites is slowly being replaced by flexible designs that work on multiple screen sizes. This speaks to the heart of what the iPad is best at: consuming content. While there are thousands upon thousands of apps in the app store, few of them focus on creating content. There are options, like drawing apps and Apple's own Garage Band for creating music, but touchscreens lack the precision of mice and keyboards for creative work.

As Apple releases a new iPad approximately once per year, there are a lot of choices out (though they discontinue old models, plenty are still for sale used). We'll lay out the different versions of the iPad.