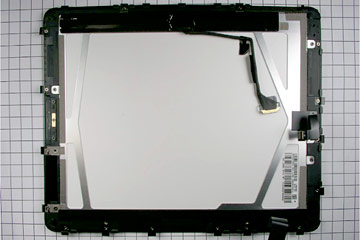 Like the iPhone, the iPad is primarily a touch device. The front is dominated by a 9.7-inch (24.6-centimeter) touch screen, with a single button (the same Home button found on the iPhone) placed below it. Apple offers two different iPad colors: one with a black face bezel and one with a white face bezel. The front also houses a webcam for Apple's FaceTime video chatting, while the back has a higher resolution camera for taking better photos. The iPad's build looks more like an iPhone 3GS than the newer iPhone 4 or iPhone 5, thanks to a smooth, curved metal body. A power button sits at the top edge of that curved surface. The iPad's only other buttons sit on the right side of the device: a rocker controls volume, while another button can serve as mute or rotation lock for the screen.

The fouth generation iPad measures 9.5 inches (24.1 centimeters) tall by 7.3 inches (18.5 centimeters) wide and 0.4 inches (1 centimeter) deep. Unlike most Android tablets, Apple has chosen a 4:3 aspect ratio for the iPad instead of the widescreen 16:9. The closer-to-square design keeps the iPad from being awkwardly tall or wide in either portrait or landscape orientation, though the trade-off is that widescreen videos can't make as much use of the screen space. The iPad uses an IPS, or in-plane switching, LCD planel. The viewing angles and colors of IPS displays are superior to standard or twisted nematic TFT screens typically found in notebooks and flat-panel monitors. For instance, the iPad can be viewed clearly from a viewing angle of 178 degrees [source: Brandrick].

While the look of the iPad hasn't changed much from iteration to iteration, it has gotten lighter (and then heavier again). Apple cut the first iPad's 1.5 pounds (0.7 kilograms) down to 1.3 pounds (0.6 kilograms) with the iPad 2. The third and fourth generation models increased that weight a little due to a larger battery. That's a rare move for Apple, but they had a good reason for the increased weight: The third generation iPad introduced a dramatically higher resolution screen to the tablet, which makes content much sharper.

We'll dive into the specifics more on the next page, which is all about the iPad's hardware.