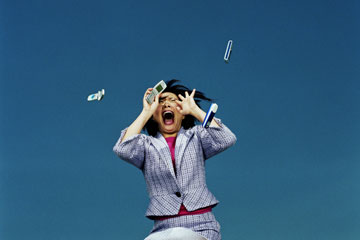 Will imported stickers save you?
Mike Powell/Taxi/Getty Images

If you're about to buy a little gold sticker to protect your brain cells from cell phone radiation, then please stop what you're doing and consider a more sensible use of your money -- such as magic beans or a wish-granting monkey's paw.

Because make no mistake, these stickers are a certified scam. Back in 2002, the U.S. Federal Trade Commission (FTC) charged two manufacturers of purported cell phone radiation protection patches with making false claims [source: FTC]. In June 2011, the agency issued an alert stating that so-called radiation shields are utterly without scientific merit [source: FTC].

First let's tackle the obvious question: Will that cell phone in your pocket give you cancer? Countless studies continue to tackle the problem, but answers remain elusive -- in large part because most cell phone users haven't had the technology long enough. Tumors typically take 10-20 years to develop [source: Butler].

Yet there's no denying that cell phones do emit small amounts of electromagnetic radiation, which is just a term for several different forms of radiating energy waves including microwaves, infrared light, ultraviolet light, X-rays, gamma rays and even visible light. A cell phone's transmitter converts your voice into an electrical signal, which it then dispatches as radio frequency energy, another form of electromagnetic radiation.

As far as radiation goes, it's pretty weak. Cell phone radiation is nonionizing radiation as opposed to ionizing radiation, meaning that it doesn't break down atoms and molecules, but our bodies still absorb it. How dangerous is this absorption? That's what we're still trying to figure out.

A small dime-sized sticker placed near the antenna, however, won't cut down on your absorption rate -- in large part because the entire phone emits electromagnetic waves. You wouldn't slap a sticker on a dirty diaper to kill the smell, would you? Of course not.

Not only do such stickers not absorb the radiation they claim to, they might actually increase the amount of radiation your phone pumps out. The FTC warns that such stickers may interfere with a phone's signal, forcing it to draw even more power to communicate with the cell tower and emitting more radiation in the process.

If you want to play it safe without abandoning your cellular technology, use hands-free headsets to distance the radiation-emitting phone from your precious brain cells. You should also consider using the phone in open spaces as opposed to enclosed rooms. Think about texting more and avoiding long calls when signal reception is poor. The harder your phone has to work to maintain a signal, the more radiation it emits.

Dial up some more links on the next page to learn even more about cell phone radiation.