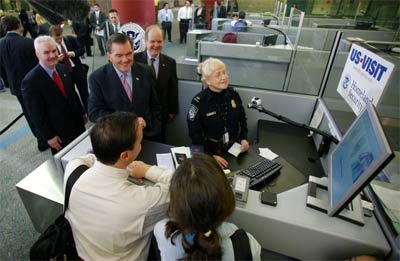 In the past, the primary users of facial recognition software have been law enforcement agencies, who used the system to capture random faces in crowds. Some government agencies have also been using the systems for security and to eliminate voter fraud. The U.S. government has recently begun a program called US-VISIT (United States Visitor and Immigrant Status Indicator Technology), aimed at foreign travelers gaining entry to the United States. When a foreign traveler receives his visa, he will submit fingerprints and have his photograph taken. The fingerprints and photograph are checked against a database of known criminals and suspected terrorists. When the traveler arrives in the United States at the port of entry, those same fingerprints and photographs will be used to verify that the person who received the visa is the same person attempting to gain entry.

However, there are now many more situations where the software is becoming popular. As the systems become less expensive, making their use more widespread. They are now compatible with cameras and computers that are already in use by banks and airports. The TSA is currently working on and testing out its Registered Traveler program. The program will provide speedy security screening for passengers who volunteer information and complete a security threat assessment. At the airport there will be specific lines for the Registered Traveler to go through that will move more quickly, verifying the traveler by their facial features.

Other potential applications include ATM and check-cashing security. The software is able to quickly verify a customer's face. After a customer consents, the ATM or check-cashing kiosk captures a digital image of him. The FaceIt software then generates a faceprint of the photograph to protect customers against identity theft and fraudulent transactions. By using the facial recognition software, there's no need for a picture ID, bankcard or personal identification number (PIN) to verify a customer's identity. This way businesses can prevent fraud from occurring.

While all the examples above work with the permission of the individual, not all systems are used with your knowledge. In the first section we mentioned that systems were used during the Super Bowl by the Tampa Police, and in Ybor City. These systems were taking pictures of all visitors without their knowledge or their permission. Opponents of the systems note that while they do provide security in some instances, it is not enough to override a sense of liberty and freedom. Many feel that privacy infringement is too great with the use of these systems, but their concerns don't end there. They also point out the risk involved with identity theft. Even facial recognition corporations admit that the more use the technology gets, the higher the likelihood of identity theft or fraud.

As with many developing technologies, the incredible potential of facial recognition comes with some drawbacks, but manufacturers are striving to enhance the usability and accuracy of the systems.

For more information on facial recognition technology and related topics, check out the links below.

A4Vision, a creator of facial recognition software, is currently marketing a system that will keep track of employees' time and attendance. Their Web site states that it will prohibit "buddy punching," which will cut down on security risks and decreased productivity.