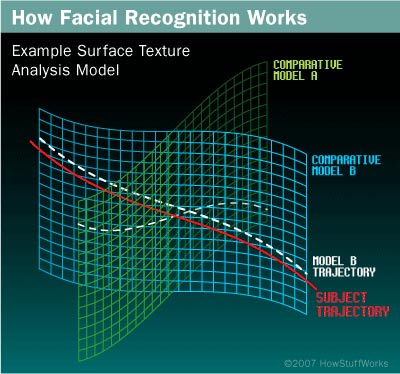 The surface texture analysis (STA) algorithm operates on the top percentage of results as determined by the local feature analysis. STA creates a skinprint and performs either a 1:1 or 1:N match depending on whether you're looking for verification or identification.

The image may not always be verified or identified in facial recognition alone. Identix® has created a new product to help with precision. The development of FaceIt®Argus uses skin biometrics, the uniqueness of skin texture, to yield even more accurate results.

The process, called Surface Texture Analysis, works much the same way facial recognition does. A picture is taken of a patch of skin, called a skinprint. That patch is then broken up into smaller blocks. Using algorithms to turn the patch into a mathematical, measurable space, the system will then distinguish any lines, pores and the actual skin texture. It can identify differences between identical twins, which is not yet possible using facial recognition software alone. According to Identix, by combining facial recognition with surface texture analysis, accurate identification can increase by 20 to 25 percent.

By combining all three templates, FaceIt® has an advantage over other systems. It is relatively insensitive to changes in expression, including blinking, frowning or smiling and has the ability to compensate for mustache or beard growth and the appearance of eyeglasses. The system is also uniform with respect to race and gender.

Poor lighting can make it more difficult for facial recognition software to verify or identify someone.
Photo © Identix Inc.

However, it is not a perfect system. There are some factors that could get in the way of recognition, including:

Identix isn't the only company with facial recognition systems available. While most work the same way FaceIt does, there are some variations. For example, a company called Animetrix, Inc. has a product called FACEngine ID® SetLight that can correct lighting conditions that cannot normally be used, reducing the risk of false matches. Sensible Vision, Inc. has a product that can secure a computer using facial recognition. The computer will only power on and stay accessible as long as the correct user is in front of the screen. Once the user moves out of the line of sight, the computer is automatically secured from other users.

Due to these strides in technology, facial and skin recognition systems are more widely used than just a few years ago. In the next section, we'll look at where and how they are being used and what's in store for the future.