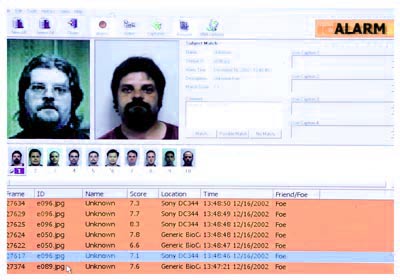 FaceIt software compares the faceprint with other images in the database.
Photo © Identix Inc.

­Identix®, a company based in Minnesota, is one of many developers of facial recognition technology. Its software, FaceIt®, can pick someone's face out of a crowd, extract the face from the rest of the scene and compare it to a database of stored images. In order for this software to work, it has to know how to differentiate between a basic face and the rest of the background. Facial recognition software is based on the ability to recognize a face and then measure the various features of the face.

Every face has numerous, distinguishable landmarks, the different peaks and valleys that make up facial features. FaceIt defines these landmarks as nodal points. Each human face has approximately 80 nodal points. Some of these measured by the software are:

These nodal points are measured creating a numerical code, called a faceprint, representing the face in the database.

In the past, facial recognition software has relied on a 2D image to compare or identify another 2D image from the database. To be effective and accurate, the image captured needed to be of a face that was looking almost directly at the camera, with little variance of light or facial expression from the image in the database. This created quite a problem.

In most instances the images were not taken in a controlled environment. Even the smallest changes in light or orientation could reduce the effectiveness of the system, so they couldn't be matched to any face in the database, leading to a high rate of failure. In the next section, we will look at ways to correct the problem.