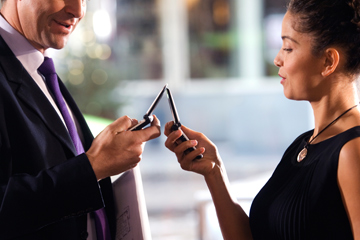 As people get more comfortable with the concept of digital wallets, they’ll spread like wildfire. You and your friends will do away with older payment methods once and for all.
Courtesy NFC Forum

Major companies are falling all over themselves to get your digital wallet business. Household names such as Google, Visa, MasterCard, Verizon, Apple, AT&T, PayPal and Square are vying for your attention.

All of these organizations are jockeying for the upper hand, in part by creating alliances with other corporate giants. PayPal started with Home Depot. Square teamed up with Starbucks. Google Wallet first found love with MasterCard. It's all part of the plan to slowly worm their way into your life. They know that if they can convince you to use their form of wallet first, you'll be unlikely to switch anytime soon.

Yet in spite of their efforts, the United States and most of the rest of the world lag far behind Japan and South Korea in terms of digital wallet adoption. Understanding why is a simple matter of seeing just how convoluted the digital wallet landscape has become, especially in America.

From smartphone manufacturers and banks to credit card companies and wireless carriers, there are a lot of stakeholders in the digital wallet puzzle. All of them want a cut of the profits. And hardly anyone can agree to a business model that satisfies everyone. Some pundits call this standoff the "digital wallet wars."

Here's just one example of how tricky this business model juggling has become. A few Verizon phones are equipped to run Google Wallet, but Verizon has disabled the app from running on their network. Why? Because as we mentioned earlier, Verizon is one of the wireless companies working to develop Isis, which is a direct competitor to Google Wallet.

The intense competition creates an overcrowded and confusing digital wallet marketplace for consumers. No one knows how they're supposed to choose between Google Wallet, PayPal or any of the many other wallet options.

That's especially true for NFC-based wallets, because so few vendors are equipped to accept that form of payment. The obstacles to NFC, in addition to business model wrangling and no-holds-barred competition, mean it will be a while before you can ditch your old wallet in favor of a digital one. It will probably be, at minimum, a decade before the digital wallet dream comes true [source: Wired].

Until then, digital wallets could remain something of a novelty, and you'll lug around your leather-bound wallet the way you always have. Keep an eye on the corporate wars surrounding digital wallets, though, because the outcome could determine the form of money you use for a long time to come.