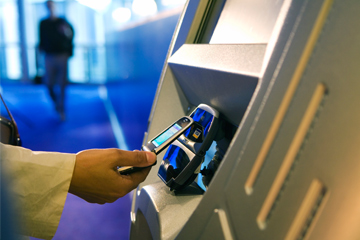 Tap an NFC-enabled payment kiosk and your transaction is complete in seconds. All you have to do is enter your PIN.
Courtesy Google

It's easy to see how quick and easy checkout benefits you while you're at your home or office computer. Doing your Christmas shopping from your desktop? A digital wallet spares your fingers the constant repetition of typing your 16-digit credit card number. But a mobile digital wallet -- that is, one on your smartphone -- could transform the way you pay no matter where you are.

More than half of Americans now own smartphones, and experts say that number will only continue to rise [source: Daily Mail]. More and more of those phones are equipped with an NFC (near-field communication) chip, which is a vital component to the mobile digital wallet infrastructure. It was estimated that around half of smartphones could have NFC by 2015 [source: USA Today]. If you've never heard of NFC technology, you may see it everywhere very soon, so be sure to read How Near Field Communication Works.

Basically, NFC is a type of wireless communication with a short range of only a few centimeters. With regard to digital wallets, NFC means you can pay for everything from bagels to parking meters simply by tapping your phone to a compatible POS (point-of-sale) terminal and then entering your secret PIN. That's the way Google Wallet works.

Google Wallet is one of the most prominent smartphone apps leveraging the power of NFC. All of your credit card data (as well as loyalty and gift cards and all sorts of other data) is stored on Google's servers and not your phone. Wallet works online, too, much like PayPal or other wallet services. Just sign into your password-protected account and you'll complete a purchase in seconds instead of minutes.

But other companies are trying to catch up. Isis Mobile Wallet is a direct competitor to Google and is supported by wireless carriers Verizon, AT&T and T-Mobile, as well as Deutsche Telecom. As with Wallet, Isis uses NFC tech, and thus, is subject to the same challenges of weak NFC infrastructure.

That's why some wallets are anti-NFC. PayPal, for example, now works at major stores such as Home Depot, Office Depot and about a dozen others [source: CNET]. After you set up your account online, to check out, you simply provide your mobile phone number and punch your PIN, and that new kitchen countertop or office chair is all yours.

Regardless of the payment method involved, wallets still have major hurdles to clear. On the next page, we'll jump into the concerns that plague just about everyone considering trading their old cowhide wallet for one made of bits and bytes.