Browse the article Can companies beam advertisements into my brain? 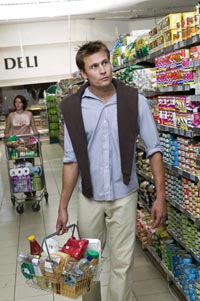 Are these grocery shoppers looking out for invasive advertising?
B2M Productions/Getty Images

Most futuristic, dystopian science fiction movies have their share of problems. Common themes often include, but aren't limited to, tyrannical robot armies, apocalyptic natural disasters and oppressive, dictatorial governments. Science fiction doesn't always provide simple, escapist entertainment with no connection to our world -- some of the best and most prescient look at the issues of the present and craft an imaginary future.

­If the movies are any indication, the threat of invasive advertising is something that comes along with the future. In Ridley Scott's "Blade Runner," released in 1982, detective Rick Deckard, played by Harrison Ford, lurks through a futuristic Los Angeles of the year 2019, where massive, floating billboards loom over the city's dark, bustling streets. Stephen Spielberg's "Minority Report," released in 2002 and set in 2054, ups the ante -- shopping malls use a high-tech form of interactive advertising, which identifies customers by eye-scan personally and acknowledges their past purchases. Both movies are adaptations of stories by science fiction writer Philip K. Dick.

By the time we reach Pixar's 2008 animated feature "WALL-E," the human race has left an over-polluted Earth and floats around space onboard a luxury cruise ship. People have evolved into obese, childlike mammals, motoring about on all-access hover-chairs. The chairs, along with the towering billboards that line the ship, keep people's attention focused on advertising for the mega-corporation running the show, Buy 'N Large.

­­How prophetic are these examples? Do we have advertising methods available today that mirror science fiction? How would it be done? Read about a new advertising technique meant to catch your ear on the next page. 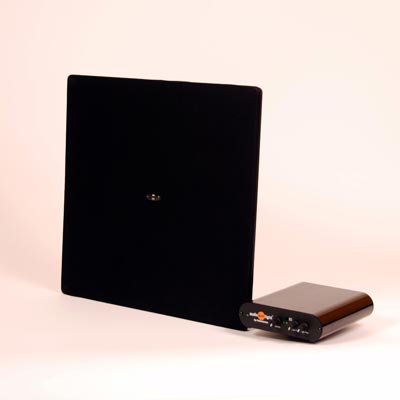 If you have an account with online vendor Amazon.com, when you open up the site's home page a short bit of text at the top greets you. It might say, for example, "Hello, Tim. We have recommendations for you." One click will lead you to another page with a list of products related to your past purchases. Although this feature isn't particularly intrusive and only exists on a Web page, are there any examples like this in brick-and-mortar stores?

While we aren't aware of any advertising technologies out there that transmit holographic images into your brain to personally greet you and offer new products, one emerging technique works with sound to capture customers' attention. This technology, developed by Holosonics, has introduced a directional speaker unit that many retail chains are currently testing for use in their stores. Instead of blasting music and announcements from an omnidirectional public-address system, directional loudspeakers -- or Audio Spotlight systems, as Holosonics calls them -- make sound audible only in certain designated locations.

The technology works by focusing sound into a narrow beam, just like light. A customer walking through the cereal aisle might pass by a certain company's box and suddenly hear and advertisement for it in his ear; however, to the person in the next aisle over, that particular ad would be inaudible.

All sounds are produced by vibrations; the sound of our voices is the result of vocal chords vibrating in our throats, while sound from a plucked guitar string comes from the vibrations of the string. The number of vibrations an object makes while it's making a sound is called its frequency, which is measured in hertz.

Sound waves humans can hear have a frequency limit of 20,000 hertz. Any higher than that and the sound becomes ultrasonic, inaudible to our ears. The cones of larger loudspeakers used in traditional public-address systems vibrate more slowly, making them better suited for sounds in the range of human hearing.

On top of this, audible sound coming from large loudspeakers has large wavelengths, ranging from a few inches to several feet, making it easier for sounds to travel in all directions. Ultrasound, on the other hand, comes from much smaller sources and therefore has much smaller wavelengths, usually only a few millimeters long. In other words, ultrasound essentially travels in a very narrow beam -- this makes it great for focusing the waves toward a desired area, but not for actual aural comprehension.

Dr. Joseph Pompei, the founder of Holosonics, has found a way to use this characteristic of ultrasound to his company's benefit. Sound waves need a medium through which to travel, whether it's air, water, glass or metal. These media distort sound. As ultrasound travels, air distorts the sound wave, creating audible frequencies. The correct ultrasound signal, Pompei suggests, can produce any kind of audible sound.

The technology has several practical uses currently in play -- museums and libraries can keep large spaces quiet while offering Audio Spotlight systems in specific areas. The equipment might also prove useful for home audio systems and end the time-honored battle of television volume or choice of music. Some remain skeptical, however, of the potentially intrusive nature of an Audio Spotlight system: Marketers are already testing out the technology in stores around the world, from electronics stores to supermarkets, and reactions of those who have experienced the phenomenon range from pleased to frightened.

For lots more information on marketing and sound, see the next page.