This Ray is Rated X 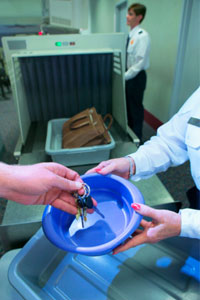 The X-rays pass through you and then are recorded onto film or a computer sensor on the other side. Because denser parts of your body (such as bones) partially block the X-rays, the resulting image displays lighter and darker areas corresponding to the relative density of your body parts. For example, your skin and flesh appear darker, while denser materials like bone appear white.

In short, the X-ray energy is imprinted on the transparent, radiographic film that your doctor sees. The result is a monochromatic picture that your doctor can use to pinpoint a broken bone or other issues.

It's impossible to use this kind of X-ray machine for airports, where efficiency is paramount and there's no time to develop film for every passenger. Instead, airports use related technology called dual-energy transmission X-ray systems to screen your carry-on items, which pass through the machine on a conveyor belt.

These dual-energy systems emit powerful rays that are then filtered in a way that lets security personnel view differences in density. Skilled operators are trained to use visual cues that tell them whether items are metallic, organic or non-organic. Their eyes also pick up on items that might indicate a potential danger. You can read more about the details of dual-energy X-rays systems in How Airport Security Works.

Backscatter X-ray machines (sometimes called soft X-ray scanners) are more sophisticated than medical X-ray and dual-energy X-ray systems. Even the machine layout is different. With traditional X-ray machines, the X-ray tube and imaging sensor sandwich the subject. But with backscatter scanners, the imaging sensor is placed on the same side of your body next to the X-ray tube.

Backscatter X-rays are much weaker than those your doctor employs. These rays don't go through your flesh and bones. Instead, they penetrate your clothing and about an inch into your body, where your tissues scatter and ricochet the rays back toward the sensor.

The sensor records those scattered rays, creating a picture that looks a lot like a naked human body. If that body happens to be surreptitiously carrying a dubious or irregular object, authorities will know. Security officials will also notice if those irregular objects are love handles, however, a touchy subject that has set off privacy debates that we'll review later.