Telling Time -- With Your Amazing Astrolabe 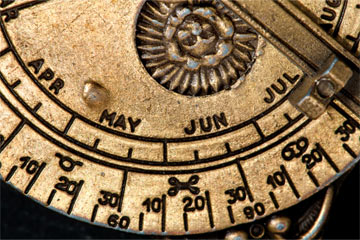 With a few twists and turns of your astrolabe, you can tell time. Relax. It's not as hard as you think once you get the hang of it.
iStockphoto/Thinkstock

Did you lose your smartphone? No worries, just pull out your astrolabe to find the time of day or night. During the day, you would base your calculations on the altitude of the sun. At night, you would use the altitude of a visible star. As an example, let's walk through the steps to determine the time of night:

The Web site of the Oxford Museum of the History of Science provides an excellent interactive demo of this last exercise, using a replica of an ancient astrolabe. As it steps you through the process, it also shows the markings on the instrument's various scales.