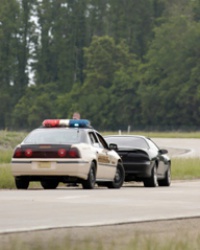 Apple iPhone users with the Trapster app are hoping to avoid a scene like this one.
©iStockphoto.com/Bill Grove

Have you ever driven down the road only to have an oncoming vehicle flashing its lights as you approach? Chances are someone is trying to warn you of a speed trap. If you have an iPhone, you won't have to rely on these visual signals from other drivers. With Trapster, you can scan your area for any known speed traps, police hang outs, speed cameras or even stop-light cameras.

Trapster displays your location on a map using the iPhone's WiFi location capabilities. Reported speed traps, which users enter into the Trapster's network database, pop up along your route. Trapster's settings allow users to setup their iPhones to give voice alerts of approaching speed traps and the dynamic radar feature compensates for a driver's speed and direction in radar to relay accurate warnings. Signal cameras and police traps show up on the display as icons for easy recognition. Although not required, users are encouraged to join the Trapster network. Registered users can then receive text messages for real time police reporting and enter new speed trap locations. Over time, the Trapster software recognizes credible reports and dismisses ones that may have been entered falsely.

With a network of more than 330,000 users worldwide, nearly two-thirds of those being iPhone owners, the Trapster network has reported more than 5 million speed traps worldwide as of November 2011. It seems that Trapster has replaced the CB radio as the best method of radar detection -- with the exception of illegal radar detection devices. And it's free, too.

Do you have any idea how "green" you drive? Confused by this question? Maybe you should read the next page.