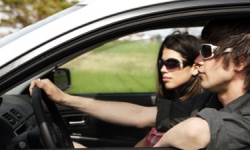 Carticipate is an iPhone app that can be used to share a ride with someone headed in the same direction.
©iStockphoto.com/Lise Gagne

Let's face it: Right now, the world's economy is in the proverbial toilet and the need for penny pinching has risen to new heights. That, coupled with the world population's ever-increasing carbon footprint, has given way to increasing efforts in alternate transportation. iPhone users can now do their part by using Carticipate, a free rideshare application downloadable from iTunes.

Carticipate brings fellow commuters together into a large social network of individuals looking to save money on fuel while also contributing to the environment by emitting less CO2 into the air in the form of emissions.

Carticipate users can search for ride locations near their cities of residence or business travel, and the sites aren't limited to the United States. International users have the same capabilities as their U.S. counterparts, and since the iPhone works all around the world, the application can be configured in English, German, French, Dutch, Italian and Spanish.

As the Carticipate network grows, the utility of the application is sure to have long-term benefits. Carticipate doubles as a social network as users are most likely to have similar concerns including environmental interests.

Up next, find out how your iPhone can save you money at the pump.