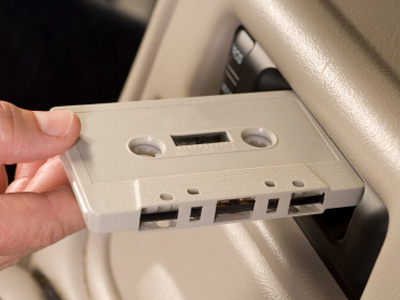 Car Gadgets Image Gallery If you still have one of these in your car, what are your options for listening to a CD? See more pictures of car gadgets.
©iStockphoto.com/Kirby Hamilton

­Paul Galvin, the founder of Motorola, introduced the public to the possibilities of music in the automobile in 1930. Ever since Galvin parked his Studebaker outfitted with a radio outside the Atlantic City pier during the Radio Manufacturers Association Convention in June of that same year, the public has come to expect tunes in their cars.

It was around the same time when Crosley Radio introduced the first car radio, dubbed the Roamio. Auto manufactures caught on and began offering radios as factory accessories. These early car radios picked up only AM stations. Eventually that evolved into picking

up AM and FM stations, but the real breakthrough came in the 1960's when 8-track players found their way into the cars of such celebrities' as Frank Sinatra, James Garner and Lawrence Welk.

As you already know, technological advances put the 8-track tape out to pasture, too. Cassette tapes replaced them for the latest in-car entertainment -- and they didn't last very long either. But there's good news for all of you out there that are still hanging onto your in-dash cassette decks. You don't have to throw away your collection of tapes or rush out and drop some hard-earned coin on the latest and greatest gadget.

If you're reading this article, chances are you don't have a CD player integrated into your vehicle's dashboard, but we're guessing that you do have a cassette player. So what happens if you decide that you'd rather listen to CDs while you're in you car, but don't want the hassle of switching out your car stereo? Not to worry. This article lists what we consider to be the five best options for listening to CDs in your vehicle if you only have a cassette player. After all, just because you don't have a fancy CD player in your car doesn't mean you shouldn't be able to listen to your favorite CDs while on the road.

So here are, in no particular order, the top five options for playing a CD in your car if you only have a cassette-tape player.

Listen to a CD through your Laptop Computer 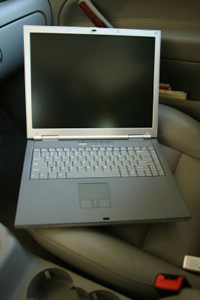 Sure, laptop computers are portable, but are they a good way to listen to CD-quality sound in your car?
iStockphoto.com/Mr. Jamsey

­If you own a laptop computer, then there's a good chance that it's equipped with a CD player. Why not utilize your computer as a portable music center?

One of the advantages to using your computer is that you have three ways you can listen to your CDs. You can choose to use a set of headphones connected to the headphone jack for a more personal music experience. This method probably works better than the second option, which is to listen to your music through portable speakers, also connected through the headphone jack. One drawback to this method is that in addition to having to take your laptop computer with you wherever you travel, you'll also have to carry a small, yet bulky set of speakers. To circumvent this problem, you could leave the speakers in your car and hook them up each time you wish to use your computer as a portable CD player.

The third method, which may be the least desirable option, is to use the laptop's built-in speakers to listen to a CD. Your experience using this technique may vary, as it greatly depends on how audible your laptop's speakers are combined with the amount of ambient noise you can hear while your car is on the road.

If you choose to use headphones, make sure to check that it's a legal option in your area first.

Listening to a portable CD player in your car seems like a good option, right? However, the challenge is finding a good power source for your portable player.

While every vehicle makes use of some kind of charging system in order to run various electrical components such as the headlights, interior lights, sensors and engine management computers, that power originates from your car's battery and is DC, or direct current, power. To play at peak performance -- and perhaps more importantly -- to maintain that level of performance, a portable CD player requires AC, or alternating current. Alternating current is the same type of power that is sent to your home to power the lights, kitchen appliances, clock radios and really anything else that you might plug into a wall outlet. Of course, batteries will work, but unless you have a pile of money that you're willing to spend on C- or D-cell batteries, a portable CD player will operate much more consistently using AC, or alternating current, for continuous power. So how do you harness that AC power and take it with you in your vehicle? A DC-to-AC power inverter is the answer.

A DC-to-AC power inverter does just what the name implies: it takes your car's DC battery power and changes it into AC power. The three types of inverters available are square wave, modified sine wave and pure sine wave. Pure sine wave inverters produce AC power with the least amount of harmonic distortion and may be the best choice; but they're also typically the most expensive. Square-wave inverters are the most cost-effective and can be found at most electronic retailers. All three types of inverters will power a CD player equally well; however, if you've got a good ear for this type of thing, you may notice the difference in the amount of interference you experience with each type of inverter.

For Those About to Rock

The heavy-hitting Australian rock band AC/DC has been cranking out classic rock anthems since 1973. Legend has it the founding members took their name from a label off the back of an appliance. For more than 30 years Angus Young's violent guitar riffs, combined with lead singer Bon Scott's then later Brian Johnson's piercing vocals, has formed the backbone of the band's high-energy sound.

Listen to a Portable CD Player

If you're like most people these days, you like to listen to your music on the go. If you have a personal portable CD player, but no in-dash CD player in your vehicle, why not take that portable player with you when you're headed out for your next trip? Just secure the player in the passenger seat, the center console or wherever it fits best, plug in your ear buds or headphones and you're ready to go. Similar to when we mentioned listening to music through headphones on your laptop, you should always check your local laws to be sure driving with headphones or ear buds is a legal option. Once you've determined that it's perfectly legal, you're free to listen to your CD collection in the car as you drive.

­The beauty with using your personal CD player is that you truly are mobile -- you're streamlined. Sure, you could use a portable CD boom box but why? You personal player is easier to tote, can be stored securely in your glove box or under your seat when you aren't in the vehicle and as an added benefit, the smaller device won't eat batteries like a larger boom box will.

In 1982, Sony launched the world's first CD player, the CDP-101. Philips followed suit, introducing the European and U.S. markets to CDs in 1983. Seeing an opportunity to thrust CDs into the mainstream, Sony built the first portable CD player, the Discman D-50. The cutting-edge technology seen in the D-50, which was thought to be impossible just years before, catapulted Sony to the top of the electronics industry [source: Sony Global]. 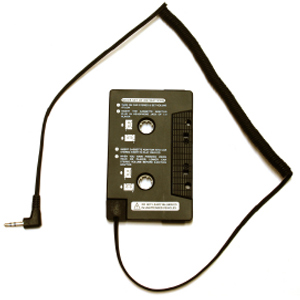 A cassette adapter allows you to listen to a CD through the car's speakers.
­iStockphoto.com/Timothy Large

Believe it or not, CD players were slow to replace cassette players. Cassettes did have a nice run, and a lot of people simply wanted to continue listening to their cassette tapes. After all, a lot of people spent a significant amount of money building a cassette tape collection they could be proud of. When CD players like the Sony Discman D-50 first hit the scene, manufacturers quickly designed adapters for cassette players that would enable you to play your CDs (on a portable CD player, of course) through the cassette slot. This method still works today and kits can be found online for reasonable prices.

Some kits come complete with a mounting bracket that allows you to fasten your portable CD player securely within your vehicle. The adapters look just like a cassette tape with a plug that fits into the headphone jack of your portable device. You simply insert the tape adapter into your in-car cassette deck and that's it: Your CD music plays over your vehicle's speakers as if it were a built-in part of your car's audio system.

Most kits also come with a small AC adapter. If your portable CD player has an AC input, you can plug one end of the adapter into your portable player and the other end into your vehicle's cigarette lighter and you have a power supply. No more wasting batteries. 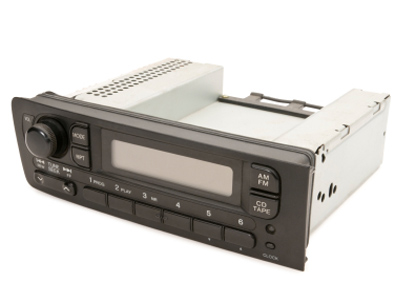 An FM modulator would allow even an older car radio, like this one, to play your CDs through the car's speakers.
iStockphoto.com/Brian Sullivan

­Perhaps the most effective method for listening to a CD player in a vehicle without an in-dash CD player is by way of an FM modulator. FM modulators allow you to pick up the music from your CD player through an empty FM station and in turn, listen through your radio as if it were wired to do so. FM modulators pick up a frequency emitted from a separate module that plugs into the headphone jack. These types of modulators are most effective in areas outside of larger cities because the number of FM stations is less than in a more populated metropolitan area.

Drawbacks to FM modulators are static and loss of signal. Whenever the modulator encounters a radio station on the channel you're using for your CD player, the signal deteriorates until the radio station takes over.

The benefits are easy operation and wireless connectivity. And if you spend a little time investigating FM modulators online, you should be able to find one that comes with an AC adapter, much like the ones found in the cassette adapter kits.

So there you have it, five good options for playing a CD in your car if you only have a cassette-tape player. If you'd like to read more about automotive electronics and other related topics, follow the links on the next page. 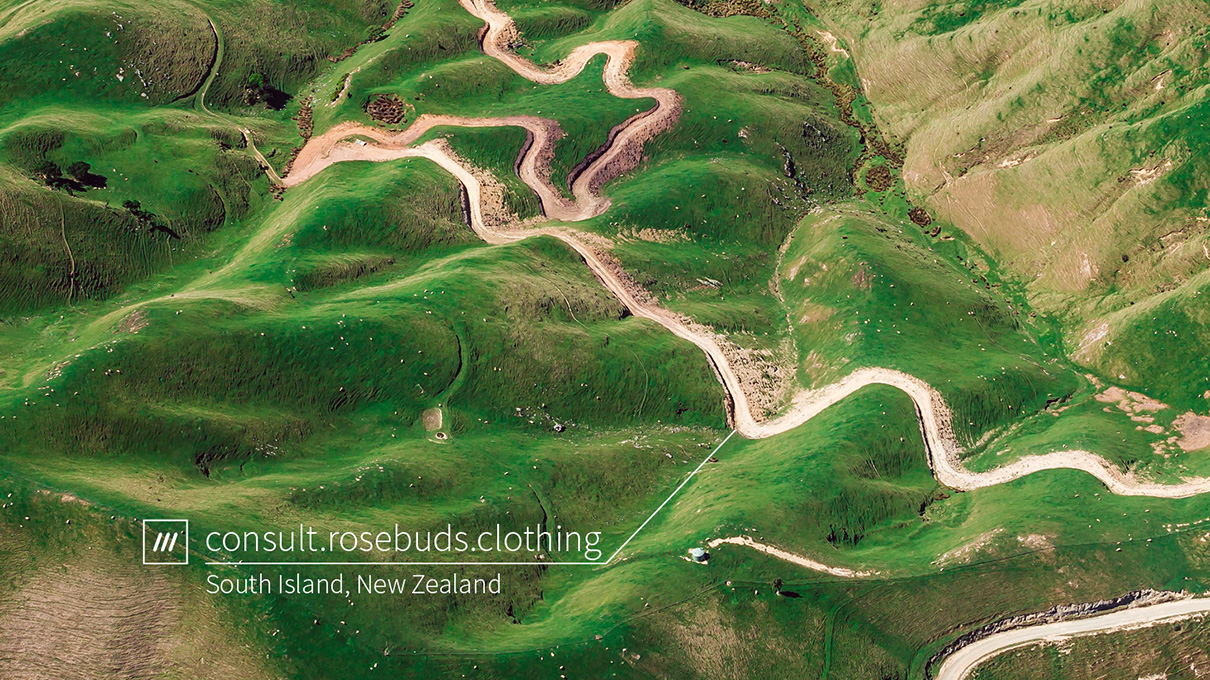