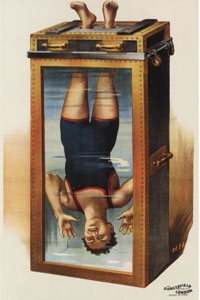 Harry Houdini's famed Chinese Water Torture Cell is not a pleasant working environment. Not only does it shackle the user upside down in a vat of chilling water, it's also impossible to listen to music inside the thing.

If the legendary escape artist were alive today, he could make use of special underwater earbuds. Better yet, he could outfit the entire torture cell with a stunning underwater sound system. With a little AC/DC cranking in there, you know he could have shaved a solid minute off his escape time.

But of course you're no Harry Houdini, and you probably don't earn your living inside a theatrical drowning booth. Yet even outside the world of professional illusion, underwater sound system technology has its place.

First, consider the world of water dancing. Synchronized swimmers need to actually hear the music while they're practicing their art. In fact, Lubell Labs, one of the oldest producers of underwater speakers, got its start following a successful product demo at the 1970 National Senior Synchronized Swimming Championships in the U.S. [source: Lubell].

Lap swimmers, scuba divers, marine biologists, cave divers and underwater film crews all benefit from underwater sound system technology as well. How better for 18 divers to communicate on a submerged Hollywood set? Plus, we also use the technology to interact with whales and repel fish from polluted waters.

So slip into your favorite high-cut swimsuit, shackle your ankles and prepare to slip beneath the surface of some hi-fi sounds.

Funky Sounds in Your Pool 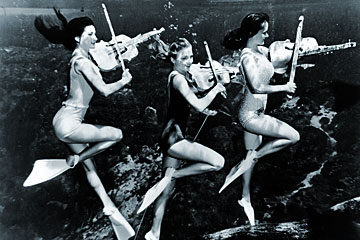 Can we really hear music on the bottom of a lake or a swimming pool? Sure we can.

Sound travels through both air and water. In fact, sound waves move 4.3 times faster underwater than they do through the atmosphere [source: NOAA]. Whales and dolphins use sound to navigate and communicate in the ocean, and humans employ sonar (sound navigation and ranging) technology to map undersea topography and the movements of both animals and ships.

Yet for all our submarines and snorkel gear, we humans are creatures of the air. We evolved to process sound data on land, so we simply don't hear as well at the bottom of a river -- despite the ability of some divers to have ultrasonic hearing underwater.

Just consider Parliament's hit 1976 single "P. Funk." As front man George Clinton point outs out in the lyrics, the song is in fact "doin' it to ya in the earhole." The sound waves vibrate the audio bones in our inner ear, an effect we call air conductivity hearing. When you're underwater, however, flooding in the outer ear prevents a lot of that necessary vibration and essentially nullifies your air conductivity hearing ability.

How does it sound? Well, the limits of bone conductivity make stereophonic sound impossible underwater. The skull provides only a single source of sound transmission, whereas air conductivity hearing provides two -- one in each ear. But that doesn't mean the sound itself is monophonic -- rather it's what Stanford University music researcher John A. Maurer IV referred to as omniphonic sound [source: Maurer].

In a swimming pool, fast-traveling sound waves leave the underwater speaker and bounce off the bottom of the pool, the surface of the water and each side of the pool. The sound reaches the listener from all directions, and the human brain simply can't process the original sound source.

The range of typical human hearing spans from 20 hertz to 20,000 hertz. Some varieties of underwater speakers, especially older models, can't produce wavelengths lower than around 1,000 hertz. To put that in perspective, the lowest and highest frequency notes on a typical 88-key piano are 27.5 hertz and 4,186 hertz. However, underwater speakers like the Clark Synthesis Diluvio employ voice coil technology -- essentially an electromagnet composed of coiled wire -- to reach wavelengths as low as 20 hertz.

Speakers From the Depths 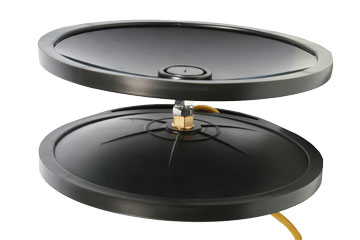 Here we see the Diluvio pool speaker. The yellow speaker wire cord connects with the speaker itself, which in turn connects to a sound lens.
Image courtesy Clark Synthesis Inc.

Normal speakers don't fare all that well at the bottom of a swimming pool, so it should come as no surprise to learn that underwater speakers come specially designed to not only deliver quality audio in a submerged environment, but also to avoid shorting out, electrocuting swimmers or turning to driftwood.

It's a rather niche corner of the audio market, so you can expect to drop anywhere between $300 and $2,000 on a quality underwater speaker. Typical models consist of a watertight, waterproof plastic speaker connected by a length of insulated speaker wire to an above-water sound system. You might choose to install the speaker inside an alcove in the pool -- in which case you might use an acoustic sound lens to direct the sound waves out into the pool -- or you might just attach the speaker to a rope and dangle it into the water.

A good underwater speaker won't sound all that great if you use it out in the air. In fact, it might sound downright awful. According to Clark Synthesis President Bill Phillips, a quality underwater speaker is more like a fine wooden instrument such as a cello or violin. The sound radiates off the entire surface area of the speaker rather than from a focused point.

The volume of water you can cover with a speaker varies. For instance, Clark Synthesis recommends one of its Diluvio pool speakers for every 20-foot-by-20-foot (6-meter-by-6-meter) section of the pool. The Lubell System 3300 Diver Recall System -- intended for use on dive boats -- can sound a siren heard across an entire 1-mile (1.6-kilometer) underwater radius, assuming optimal conditions. Dive speakers such as these enable instructors to communicate with other divers, but they can also blast funky beats for man and fish alike. 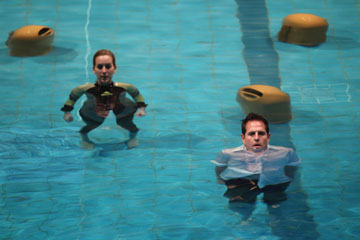 I dearly wanted to work a bacta tank reference into this article, but alas there's only so much room for silliness in an article. This is especially true when the science involved is so fascinating. I have to admit, I wasn't expecting this one to stir my mind all that much, but I found the science of underwater acoustics really fascinating.

I'd like to thank Clark Synthesis President Bill Phillips for taking the time to chat with me about underwater sound system technology. He was nice enough to straighten me out about some of the finer points. When personally testing out speaker installations for the U.S. Synchronized Swimming Team, he likes to play some Vivaldi on both air and underwater speakers, dipping his head in and out of the water until the sound quality in the pool matches that at poolside. I love that commitment to sound quality.

Oh, and if you'd like to explore the underwater sounds of composer Michel Redolfi, I encourage you to explore the musician's official Web page. You can also sample his sounds on his YouTube page.