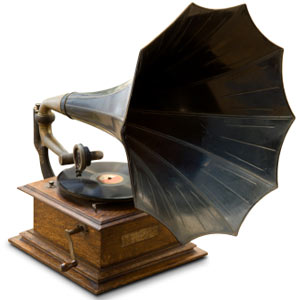 While the gramophone is unlikely to make a comeback, you can purchase modern turntables designed to replicate its look.
©iStockphoto.com/Mark Swallow

Vinyl just won't die. The 8-track and cassette tape challenged its might in the 1970s and 1980s. CDs took over the market in the 1990s. iTunes drove a digital download revolution in the 2000s. As each new format challenged the record player with advances in technology and portability, the vinyl market grew smaller and smaller. But it didn't die.

And then, something strange happened. Vinyl sales picked up. And they kept going up. In 2011, new vinyl record sales grew 39 percent over 2010 sales, to 3.9 million records — higher than they'd been in 20 years [source: [url='https://www.digitalmusicnews.com/2012/01/04/vinylsalesup39/[/url']]. Are turntables becoming popular again? The statistics speak for themselves — you've got to have something on which to play all those newly-purchased vinyl records. But the real question is this: Why is vinyl making a comeback? Even with big growth in 2010 and 2011, vinyl's hardly set to upstage the Internet or even the CD as a popular music format. What do people see in vinyl?

Well, the trusty record has two things playing to its advantage. One: the unique sound of analog, something missing from digital formats. Two: collectability, driven by the increased space for album artwork and the special care poured into the creation of many modern vinyl runs. Vinyl albums and the turntables that play them have taken on a niche role in the modern music scene. While they were once the inferior technology for conveniently listening to music, they're now the coolest alternative to the simplicity of an MP3. Let's take a deeper look at why turntables are still selling and what that means for the music market.

The Sweet Sound of Vinyl

The wistful strum of an acoustic guitar in Led Zeppelin's "Going to California," the mournful voice of Joni Mitchell in every song of her album "Blue" — there's just something about that music that sounds like it was born for vinyl. Vinyl's defenders prefer the format for listening to music for a variety of reasons. Some prefer the "warmer" sound of vinyl, though that's a vague description that can mean different things to different people. For some, it might just refer to the snaps, crackles and pops that can be heard in vinyl playback.

More serious audiophile listeners might not want to hear those pops at all. A high quality turntable and sound system can remove many of the imperfections picked up by cheaper gear. Still, those vinyl defenders could define a "warm" sound as the greater dynamic range of analog audio. The grooves in a vinyl album more accurately reflect the sound waves of an audio signal than a digital file, but audiophiles will forever argue about the merits of analog versus digital audio and which one is truly superior.

There are even some vinyl listeners who aren't in it for the sound: In the digital age, big 12 inch records offer a really cool way to collect music. 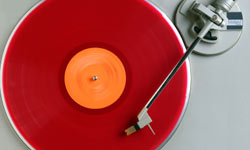 Colored vinyl continues to be popular with collectors.
©iStockphoto.com/SebastianKnight

A massive collection of music on iTunes is awesome. A subscription to a streaming service like Spotify or Rdio gives computer users access to millions upon millions of songs at any given moment. But those songs are just files. There's no physicality, no liner notes to pore over or elaborate artwork to lovingly scrutinize. That's something only physical media, such as vinyl records and CDs, can offer. But to a lot of music fans, CDs are boring — their cases are too small to depict album art with the same boldness as a vinyl record sleeve.

Another point in vinyl's favor: As albums have become more popular among collectors in the 2000s, limited releases have made records cooler than ever with colored and split-color vinyl. Most vinyl albums are black, but they don't have to be — pigmented materials can make albums red, blue, pink, white, orange or practically any other color. Mixing together multiple vinyl pellets while pressing a record can turn out albums that are completely one-of-a-kind.

While there are decades' worth of classic albums still available on vinyl at low prices, modern artists often put lots of work into vinyl releases to make them special products for diehard fans. Vinyl sales are climbing, but they're still a small niche of the music business. Digital is now the standard for buying music — vinyl is the special release for fans who want something more. Sales are up year after year, but we have to keep them in perspective. CDs are still the most popular physical music format purchased.

Sales of Vinyl Albums and Turntables

Vinyl album sales have climbed every year since 2006, jumping from less than 1 million annual sales up to nearly 4 million sales in 2011 [source: DigitalMusicNews]. Those figures only account for new vinyl sales, too — record stores around the world still sell old and used albums that aren't tracked in sales statistics. That's huge growth for the vinyl market, but still only represents a small portion of the overall music market. Physical album sales continued to shrink in 2011, but they still crossed the 228 million mark. Four million vinyl records are still a drop in the bucket. Digital sales, meanwhile, passed 50 percent market share for the first time in 2011 [source: Time].

In the 2000s, some turntable manufacturers started designing record players that capitalized on the old school appeal of vinyl. Many retro or nostalgia turntables look like players or radios from the 1930s, '40s and '50s. Those record players represent a small section of the market and include other features like CD players. Of course, audiophiles prefer dedicated record players with features like direct drive turntables and calibrated tonearms.

As of 2012, turntables are readily available — at price points from $150 to $1000. There are affordable players out there for vinyl newcomers, and expensive tables out there for DJs and audiophiles. USB turntables offer an appealing entry point for modern vinyl purchasers: They can be used to convert albums to digital and are often affordable, making them useful for vinyl lovers with big music collections and newcomers looking for a cheap record player.

I didn't grow up listening to vinyl. My dad was all about the CD revolution. But in high school, I got the bug. One of my friends had a retro turntable and a small collection of awesome albums, and the first time I heard Led Zeppelin blasted over the turntable's wimpy built-in speakers (complete with some background noise and the occasional pop), I was hooked. Since then, I've built up a small collection of my own (thanks for the abandoned box of 70s records, Dad!) and done my fair share of writing about and researching record players. I'm glad to see vinyl making a comeback, mostly because I think colored vinyl is extremely rad. The prizes of my collection are a bright orange record by Ra Ra Riot and a red-and-blue transparent album by The Protomen.