History of the Talk Box 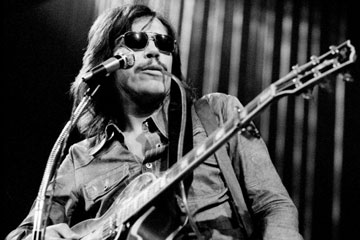 John Kay of Steppenwolf performs with a talk box in 1972.
Jorgen Angel/Redferns/Getty Images

The talk box dates back to at least 1939, when big band musician Alvino Rey used an early version. You can actually see Rey perform a slightly bizarre-sounding version of "St. Louis Blues" with "Stringy," the talking steel guitar puppet, in a film clip from the 1940s. By 1964, steel guitarist Pete Drake adopted the talk box for the song "Forever," which turned into a Gold record hit.

In fact, it was Pete Drake who personally exposed Peter Frampton to the talk box device. The two musicians crossed paths during the recording sessions for George Harrison's 1970 work, "All Things Must Pass," Harrison's first solo album after the Beatles broke up. Harrison had asked Drake to lend his legendary steel guitar sound to his album (which you can hear on the track "I Live For You"). A young Frampton was also there to play some uncredited guitar on a few songs. Drake dazzled the other musicians, and especially Frampton, with his talk box sound.

But a few notable musicians were using the talk box before Frampton was able to put his legendary stamp on the device. Stevie Wonder adopted the talk box for his keyboard setup as early as 1972 for a few of his songs, including "Love Having You Around." And rock guitarist Joe Walsh released his classic "Rocky Mountain Way," with its memorable talk box break, in 1973. But these musicians all used their own talk boxes before the devices were commercially made. It was a sound and radio engineer, Bob Heil, who made the first commercialized versions of the talk box. According to Heil, Peter Frampton's girlfriend called the engineer one day asking for one of his original fiberglass talk boxes to give Frampton as a Christmas gift [source: Musician's Friend].

In 1976, Peter Frampton's breakthrough solo album, "Frampton Comes Alive," came out. The popular tracks "Show Me the Way" and "Do You Feel Like We Do" on this album featured his talk box guitar sound, and he forever become synonymous with the effect. Other artists went on to use the talk box, including Guns N' Roses, Aerosmith, Metallica and even the Foo Fighters. Bon Jovi's 1986 hit, "Living on a Prayer," famously features a distinctive talk box effect as well.

Today, despite its slightly dated sound, the charm of the talk box endures and forever holds an honored place in rock history.