Make It Yours: Developing a Signature Sound 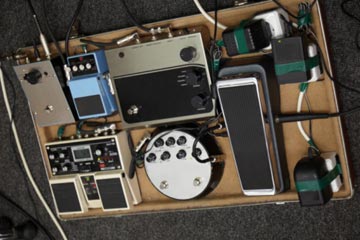 If you want your own signature sound, a personal pedal board is the way to go.
Hemera/Thinkstock

Some players, like Eric Clapton, rely on amplifiers and guitar pickups to achieve a signature sound. Others use a variety of off-the-shelf effects. Still others have effects built to their own specifications. (Neil Young's red box and "whizzer" come to mind.) Your personal budget, the style of music you play and your own personality will determine which types of pedal effects work for you.

Once you've invested in a few effects, you'll probably want to investigate a single power supply to operate all your effects. Some devices supply power for up to eight different effects. Other manufacturers sell pedal boards designed to power, transport and protect pedal effects.

You'll also want to chain your pedals together to create effects layers and enable you to switch between pedals during live performance. There are a few rules of thumb when chaining pedal effects:

Jimi Hendrix's "Machine Gun" wouldn't be the same tune without his Uni-Vibe pedal. From Korg's KP3 Effects Sampler to Electro-Harmonix Frequency Analyzer, there's a whole universe of mind-blowing pedal effects to inspire your sound and your songwriting. Find lots more information, including schematics and mod-it-yourself links, below.