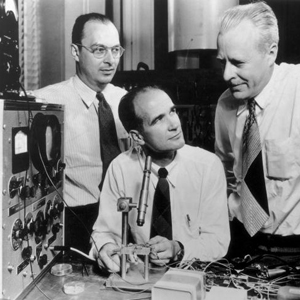 Before transistors, product engineers used vacuum tubes and electromechanical switches to complete electrical circuits. Tubes were far from ideal. They had to warm up before they worked (and sometimes overheated when they did), they were unreliable and bulky and they used too much energy. Everything from televisions, to telephone systems, to early computers used these components, but in the years after World War II, scientists were looking for alternatives to vacuum tubes. They'd soon find their answer from work done decades earlier.

In the late 1920's, Polish American physicist Julius Lilienfeld filed patents for a three-electrode device made from copper sulfide. There's no evidence that he actually created the component, but his research helped develop what today is a field effect transistor, the building block of silicon chips.

Twenty years after Lilienfeld filed his patents, scientists were trying to put his ideas to practical use. The Bell Telephone System, in particular, needed something better than vacuum tubes to keep its communications systems working. The company assembled what amounted to an all-star team of scientific minds, including John Bardeen, Walter Brattain and William Shockley, and put them to work researching vacuum tube substitutes.

In 1947, Shockley was director of transistor research at Bell Telephone Labs. Brattain was an authority on solid-state physics as well as expert on nature of atomic structure of solids and Bardeen was an electrical engineer and physicist. Within a year, Bardeen and Brittain used the element germanium to create an amplifying circuit, also called a point-contact transistor. Soon afterward, Shockley improved on their idea by developing a junction transistor.

The next year, Bell Labs announced to the world that it had invented working transistors. The original patent name for the first transistor went by this description: Semiconductor amplifier; three-electrode circuit element utilizing semi conductive materials. It was an innocuous-sounding phrase. But this invention netted the Bell team the 1956 Nobel Prize for Physics, and allowed scientists and product engineers far greater control over the flow of electricity.

It's no exaggeration that transistors have enabled some of humankind's biggest leaps in technology. Keep reading to see exactly how transistors work, how they altered the course of technology, and in the process, human history, too.