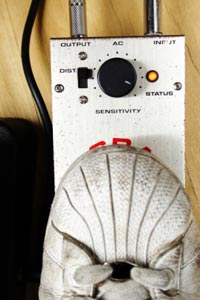 Loops and delays can create otherwordly sounds from your guitar.
Hemera/Thinkstock

As we mentioned earlier when discussing Duane Eddy and his homemade 500-gallon echo chamber, reverb and echo were among the first effects guitarists attempted to engineer. The results, from the very first tape-based echo units to the most advanced looping pedals of today, have done nothing less than change the face of music. Vocalists today wouldn't dream of recording leads without first drenching their dulcet tones in reverb. Listen to U2's guitarist the Edge on "Where the Streets Have No Name," and you'll hear the stunning guitar delay that has influenced a whole generation of new players. Finally, modern looping pedals have enabled performers like Theresa Andersson to elevate the traditional singer-songwriter experience to a new level by using a variety of instrument and vocal loops performed live.

Here's how some of the most classic time-based effects work:

You've affected a signal's volume, messed with its pitch and made it repeat itself. What territory is there left to explore? One word: frequency. Discover filter effects and everything else on the next page.