Make It Loud: Boosting, Compressing or Distorting a Signal 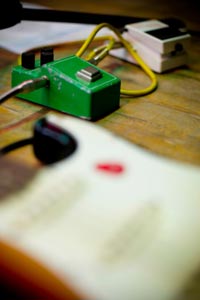 Ask most guitarists which pedal they would keep if they landed on a desert island with only a guitar, an amp and one effect, and it would probably be some sort of booster pedal. In the journey toward the weirdest guitar sounds imaginable, pedals that affect a guitar's volume are the first steps along the path.

Compression, booster and preamp pedals affect a guitar's signal in a clean, non-distorted way. Preamps or booster pedals raise the overall level of a signal; electric players often use these to egg their tube amps info overdrive. Compression pedals, on the other hand, narrow a tone's dynamic range by limiting the attack on a note and amplifying its decay. Put your compressor or preamp at the beginning of your effects chain to send hot, clean, level signals to the rest of your stomp boxes. Slap a noise gate pedal at the end of your chain to silence hiss and unwanted noise from other pedals. (Be careful with noise gates, however. They may clip off your guitar's sustain, creating an unnatural stutter.)

Though clean-sounding booster pedals are fine, what many players want most is a way to add a bunch of distortion to their sound. Here are three different ways to dirty up your tone:

Now that you've learned how to muddy up your sound, let's take a look at ways to make it weirder. Next, we explore the wide world of modulation effects.