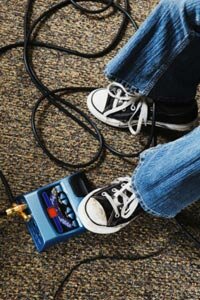 An array of pedals can turn the clean and sometimes thin sound of an electric guitar into something wild and distorted.
Jupiterimages/Brand X Pictures/Thinkstock

Think "guitar god," and a particular image of Jimi Hendrix springs to mind: Hendrix kneeling, shamanlike, before his Fender Stratocaster, his hands seeming to coax flames from the instrument. Captured by photographer Jim Marshall at the 1967 Monterey Pop Festival, this image is burned into the collective consciousness of American rock culture in the same way that Hendrix's signature sound still echoes through the years. His defiant rendition of the "Star Spangled Banner" isn't quite a technical masterpiece -- one could almost play the melody with a single finger. What elevates the song is its sound. To get that dissonant wailing, Hendrix uses two effects: an Arbiter Fuzz Face and the Vox Wah-Wah [source: Trynka].

Almost since the birth of amplified guitars in the early 1930s, players looked for ways to enhance the sound of their electric guitars. A huge variety of guitar effects have emerged from their experiments. These include rack-mounted effects, effects built into amplifiers, and pedal effects. While rack-mounted and built-in effects are separate topics, this article focuses on stomp boxes, which are foot-switchable pedal effects designed for use during live performance.

Some guitarists design or modify their own pedals. Others use a combination of off-the-shelf effects. Kurt Cobain stomped on Electro-Harmonix Big Muff and ProCo Rat pedals to create his classic loud-soft-loud, "Nevermind"-era sounds. John Mayer kicked off his 2003 hit, "Bigger Than My Body," with see-sawing, arpeggiated sounds from his Roger Linn AdrenaLinn III pedal. There are hundreds, if not thousands, of different stomp boxes. Although there's a certain amount of gray area and overlap, pedal effects can all be divided into four general categories:

Before diving more deeply into each category, let's take a quick look at the history of guitar effects.

The first amplified guitars appeared during the swing era in the early 1930s. Back then, big bands ruled the day, and horn players were the stars. Naturally, guitarists wanted to grab some of those solos for themselves, but the natural sound of early amplified guitars was thin, reedy and thoroughly anticlimactic.

It's no surprise that guitarists quickly began looking for ways to pump up their sound. The very first guitar effects were built into instruments themselves. In the 1930s, Rickenbacker made a clunky Vibrola Spanish guitar with motorized pulleys that jiggled the bridge to create a vibrato effect. In the 1940s, DeArmond manufactured the world's first standalone effect, a type of tremolo. Many guitarists looked for a way to reproduce the natural reverb and echo they enjoyed during soundchecks in empty halls. Guitarist Duane Eddy outfitted a 500-gallon metal water tank with a speaker at one end and a microphone at the other to create an artificial echo chamber for recording. However, there was no way he could have used such a contraption on stage [source: Hunter].

Early standalone guitar effects were powered with vacuum tubes. They were bulky, expensive, fragile and not very practical for live performance. Then, in the early 1960s, the transistor became widely available. For the first time, engineers were able to create affordable, portable standalone effects, such as the Uni-Vibe Jimi Hendrix used on his song "Machine Gun." By the late 1970s, manufacture of affordable, solid-state effects had exploded, creating a whole new gear market that continues to thrive today.

Let's take a look at each major type of effects pedal. First up, we'll explore pedals that affect dynamics. 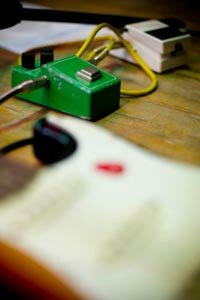 Ask most guitarists which pedal they would keep if they landed on a desert island with only a guitar, an amp and one effect, and it would probably be some sort of booster pedal. In the journey toward the weirdest guitar sounds imaginable, pedals that affect a guitar's volume are the first steps along the path.

Compression, booster and preamp pedals affect a guitar's signal in a clean, non-distorted way. Preamps or booster pedals raise the overall level of a signal; electric players often use these to egg their tube amps info overdrive. Compression pedals, on the other hand, narrow a tone's dynamic range by limiting the attack on a note and amplifying its decay. Put your compressor or preamp at the beginning of your effects chain to send hot, clean, level signals to the rest of your stomp boxes. Slap a noise gate pedal at the end of your chain to silence hiss and unwanted noise from other pedals. (Be careful with noise gates, however. They may clip off your guitar's sustain, creating an unnatural stutter.)

Though clean-sounding booster pedals are fine, what many players want most is a way to add a bunch of distortion to their sound. Here are three different ways to dirty up your tone:

Now that you've learned how to muddy up your sound, let's take a look at ways to make it weirder. Next, we explore the wide world of modulation effects.

Back in the 1940s, Don Leslie developed a speaker cabinet that split a signal between a 15-inch drum speaker and a high-end horn. The drum and horn rotated at different speeds in opposite directions, producing sounds which revved from slow to shimmering as the speakers rotated in and out of phase with each other. Attempts to reproduce these sounds resulted in the first modulation effects. Studio trickery, such as the kind of manual tape flanging the Beatles used on "Lucy In The Sky With Diamonds," also provided inspiration for future modulation pedals [source: Hunter].

Modulation effects work by disturbing a signal's pitch and/or frequency to create everything from spaceship sounds to classic vibrato. Popular types of modulation pedals include:

Modulation effects produce some of the most interesting and bizarre sounds available for guitar. However, if you think pitch and frequency effects are fun, time-based effects will really blow your mind. Do you hear an echo? Head over to the next page and find out. 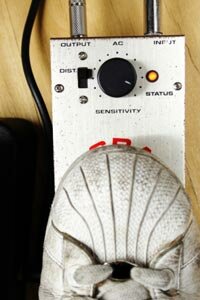 Loops and delays can create otherwordly sounds from your guitar.
Hemera/Thinkstock

As we mentioned earlier when discussing Duane Eddy and his homemade 500-gallon echo chamber, reverb and echo were among the first effects guitarists attempted to engineer. The results, from the very first tape-based echo units to the most advanced looping pedals of today, have done nothing less than change the face of music. Vocalists today wouldn't dream of recording leads without first drenching their dulcet tones in reverb. Listen to U2's guitarist the Edge on "Where the Streets Have No Name," and you'll hear the stunning guitar delay that has influenced a whole generation of new players. Finally, modern looping pedals have enabled performers like Theresa Andersson to elevate the traditional singer-songwriter experience to a new level by using a variety of instrument and vocal loops performed live.

Here's how some of the most classic time-based effects work:

You've affected a signal's volume, messed with its pitch and made it repeat itself. What territory is there left to explore? One word: frequency. Discover filter effects and everything else on the next page.

Changes in frequency, wavelength, wavenumber, amplitude, intensity, speed and direction will all affect the way we perceive sound waves. Filter effects work on those sound wave qualities in a number of ways. Wah-wah will make your guitar sing or cry. Tweaking EQ can make your signal as tinny as an old AM radio or as bass-heavy and muffled as the club next door. Here's the skinny on filter and modeling pedals:

In addition to dynamic, modeling, time-based and filter effects, many pedal manufacturers have also developed all-in-one solutions. The Boss ME-70 Guitar Multiple Effects Pedal Board bundles a variety of different effects into a single powerhouse pedal. Line 6 makes a line of popular Pod effects that simulate classic amplifier sounds and also offer a variety of different effects.

Now that you know how effects pedals work, it's time to put them to use. We'll talk about developing a signature sound on the next page. 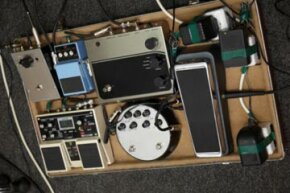 If you want your own signature sound, a personal pedal board is the way to go.
Hemera/Thinkstock

Some players, like Eric Clapton, rely on amplifiers and guitar pickups to achieve a signature sound. Others use a variety of off-the-shelf effects. Still others have effects built to their own specifications. (Neil Young's red box and "whizzer" come to mind.) Your personal budget, the style of music you play and your own personality will determine which types of pedal effects work for you.

Once you've invested in a few effects, you'll probably want to investigate a single power supply to operate all your effects. Some devices supply power for up to eight different effects. Other manufacturers sell pedal boards designed to power, transport and protect pedal effects.

You'll also want to chain your pedals together to create effects layers and enable you to switch between pedals during live performance. There are a few rules of thumb when chaining pedal effects:

Jimi Hendrix's "Machine Gun" wouldn't be the same tune without his Uni-Vibe pedal. From Korg's KP3 Effects Sampler to Electro-Harmonix Frequency Analyzer, there's a whole universe of mind-blowing pedal effects to inspire your sound and your songwriting. Find lots more information, including schematics and mod-it-yourself links, on the next page.