Magnetic recording is a backbone technology of the electronic age. It is a fundamental way for permanently storing information. 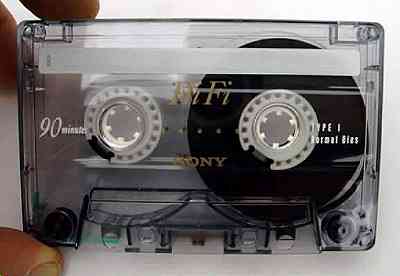 There are two parts to any audio magnetic recording system: the recorder itself (which also acts as the playback device) and the tape it uses as the storage medium.

The tape itself is actually very simple. It consists of a thin plastic base material, and bonded to this base is a coating of ferric oxide powder. The oxide is normally mixed with a binder to attach it to the plastic, and it also includes some sort of dry lubricant to avoid wearing out the recorder.

Iron oxide (FeO) is the red rust we commonly see. Ferric oxide (Fe2O3) is another oxide of iron. Maghemite or gamma ferric oxide are common names for the substance.

This oxide is a ferromagnetic material, meaning that if you expose it to a magnetic field it is permanently magnetized by the field. That ability gives magnetic tape two of its most appealing features:

These two features are what make tapes and disks so popular -- they are instant and they are easily changed.

Audio tapes have gone through several format changes over the years.

If you look inside a compact cassette, you will find that it is a fairly simple device. There are two spools and the long piece of tape, two rollers and two halves of a plastic outer shell with various holes and cutouts to hook the cassette into the drive. There is also a small felt pad that acts as a backstop for the record/playback head in the tape player. In a 90-minute cassette, the tape is 443 feet (135 meters) long.

The simplest tape recorders are very simple indeed, and everything from a Walkman to a high-end audiophile deck embodies that fundamental simplicity.

The basic idea involves an electromagnet that applies a magnetic flux to the oxide on the tape. The oxide permanently "remembers" the flux it sees. A tape recorder's record head is a very small, circular electromagnet with a small gap in it, like this:

This electromagnet is tiny -- perhaps the size of a flattened pea. The electromagnet consists of an iron core wrapped with wire, as shown in the figure. During recording, the audio signal is sent through the coil of wire to create a magnetic field in the core. At the gap, magnetic flux forms a fringe pattern to bridge the gap (shown in red), and this flux is what magnetizes the oxide on the tape. During playback, the motion of the tape pulls a varying magnetic field across the gap. This creates a varying magnetic field in the core and therefore a signal in the coil. This signal is amplified to drive the speakers.

In a normal cassette player, there are actually two of these small electromagnets that together are about as wide as one half of the tape's width. The two heads record the two channels of a stereo program, like this:

When you turn the tape over, you align the other half of the tape with the two electromagnets.

When you look inside a tape recorder, you generally see something like this:

At the top of this picture are the two sprockets that engage the spools inside the cassette. These sprockets spin one of the spools to take up the tape during recording, playback, fast forward and reverse. Below the two sprockets are two heads. The head on the left is a bulk erase head to wipe the tape clean of signals before recording. The head in the center is the record and playback head containing the two tiny electromagnets. On the right are the capstan and the pinch roller, as seen below:

The capstan revolves at a very precise rate to pull the tape across the head at exactly the right speed. The standard speed is 1.875 inches per second (4.76 cm per second). The roller simply applies pressure so that the tape is tight against the capstan. 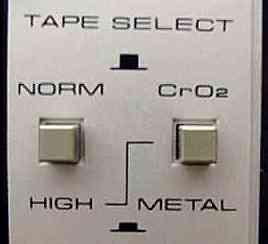 Most higher-end tape decks have controls like those below for different tape formulations and bias.

Most higher-quality tapes tell you their formulation by stating a type. There are four types of tape in common use today:

The controls on the tape deck let you match the recording bias and signal strength to the type of tape you are using so that you get the best sound possible.

Bias is a special signal that is applied during recording. The first tape recorders simply applied the raw audio signal to the electromagnet in the head. This works, but produces a lot of distortion on low-frequency sounds. A bias signal is a 100-kilohertz signal that is added to the audio signal. The bias moves the signal being recorded up into the "linear portion" of the tape's magnetization curve. This movement means that the tape reproduces the sound recorded on it more faithfully. Several of the links on the next page go into this topic in detail, and also cover Dolby noise-reduction systems.

For more information on tape recorders, cassettes, magnetic recording and related topics, check out the links on the next page.