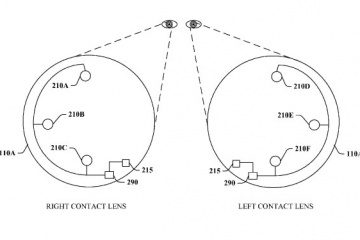 A diagram from Google's Patent No. US20140098226. The circular items labeled 210 in the diagram are described in the patent application as image capture components, i.e. cameras.
Google/United States Patent and Trademark Office

People have been working on putting computing hardware into contact lenses for years now. One breakthrough happened in 2009 when a group at the University of Washington in Seattle successfully tested a prototype that incorporated an integrated circuit, an antenna, a radio receiver and an LED into a contact lens that could receive power via RF from an external battery to light the LED. Two of the same researchers worked with Google X labs to create a prototype for a glucose-detecting smart contact lens, a project that was officially announced by the company in January 2014. So integrating other minuscule hardware -- such as a tiny camera -- isn't all that far-fetched.

And it's already in the works, at least in the patent-sphere. Several patents filed by Google in 2012 having to do with integrating computing components into contact lenses were released by the U.S. Patent and Trademark Office in early 2014. At least one of them, titled "Image Capture Component On Active Contact Lens," involves embedding tiny camera hardware.

One of the inventors listed on the patent, Babak A. Parviz, worked on the both of the formerly mentioned contact projects, as well as Google Glass, which integrates a smartphone with image capture and other capabilities into a glasses form factor. In a way, smart contacts are the next logical step after Google Glass.

Since the camera-laden contact lens is only at the patent level publicly -- although it could be in the works in the lab at this point -- there's no telling if or when it will actually come out as a viable consumer product. But if it does, it is sure to be a game changer.