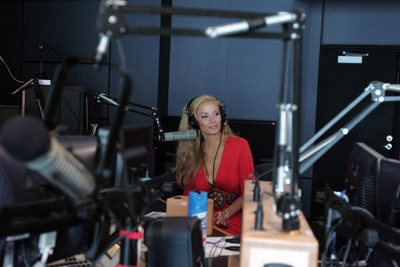 The Federal Communications Commission controls, manages and sells the air waves that radio and television stations use.
© Bryan Bedder/Getty Images

Air waves are filled with information. Ever since Guglielmo Marconi first successfully transmitted wireless signals over a small distance at the turn of the 20th century, physicists, engineers and inventors have figured out how to use radio waves to transmit voice, data and video signals.

How do all these airborne transmissions avoid interfering with each other? In the United States, every business or individual who wants to broadcast using radio waves must acquire a license from the Federal Communications Commission (FCC). The FCC allocates different frequency ranges for different types of radio technology (AM radio, cell phone signals, television broadcasts, et cetera).

If you want to start a local radio station, for example, you need to apply for and purchase a license from the FCC to operate on a certain radio frequency (illegal, unlicensed broadcasts are called pirate radio). Since radio signals can only travel relatively short distances, the FCC will grant licenses for the same radio frequency to stations in different geographical areas.

Since 1994, the FCC has auctioned off licenses for available frequencies of the electromagnetic spectrum. The agency decided that anonymous auctions were the best way to increase competition, raise more money and avoid unfair collusion or secret arrangements between multiple buyers.

In a world of huge multimedia and telecommunications conglomerates, critics of FCC auctions say that awarding licenses to the highest bidder unfairly excludes smaller third-party companies from entering the market. The FCC argues that the auction system saves time on lengthy hearings and lotteries and awards licenses to the organization that'll use them most effectively.

How exactly do these auctions work? Do all the bidders gather in the same room with one of those fast-talking auctioneers? Who qualifies as a bidder? And what are they bidding on exactly? Read on to find out more.