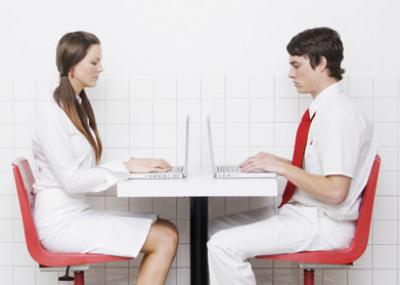 It doesn't look like the Internet is bringing these two any closer together.
Pulp Photography/Getty Images

Numerous studies have investigated the impacts of Internet use on society. The Internet has a unique ability to open up doors, like enabling a man in the U.S. to trace his ancestry all the way back to Africa. It also has the ability to open up a huge can of worms -- just ask the Saudi Arabian man who was arrested for political commentary he posted on his blog [source: Ambah].

Many of the studies concerning Internet usage focus specifically on how it affects people's relationships. So far, these studies have failed to reach any conclusive finding. For each result, there seems to be a study that proves the opposite. While some argue that an increased use of the Internet can lead to social isolation and depression due to reduced personal interaction and communication, others say the Internet brings people closer by crossing barriers like distance and economic status.

Aside from the Internet's effect on relationships, it can also influence our safety and security. When anyone with access to a computer can Google "bomb-making" and have comprehensive instructions at his or her fingertips in seconds, it makes you think twice about the wisdom in making so much information freely accessible. Similarly, the abundance of classified and personal information stored on computer databases makes espionage and identify theft that much more possible. On the flip side, all those Web sites tracking your comings and goings can provide you with a 24/7 electronic alibi.

The Internet can do a lot of good as well. Online college courses have made college degrees more accessible to people who can't realistically attend classes, while nonprofit organizations have used Web sites to drum up support and raise millions of dollars.

Politics has even entered the fray. Political action committees fill inboxes with spam and candidates use the Internet to promote themselves. 2008 U.S. presidential candidate Sen. Barack Obama, for instance, reached millions of donors through his Internet ads and raised more than $91 million in the first two months of 2008 [source: Mosk]. MoveOn.org, a popular online political action committee, has raised millions for democratic candidates and may have been a force behind their sweep to power in 2006 [source: Garrett].

If Internet connectivity continues to spread at the rate it has over the last decade or so, it's not a stretch to picture a totally wired world in the near future. With technology bringing us ever more gadgets that can access the abundance of online information, it may only be a matter of time before your dog has his own BlackBerry collar.

In the end, whether that connectivity is positive or negative depends on who's doing the connecting, just like "how wired we are" depends a lot on who "we" are. If "we" are young, affluent, college-educated kids, we're probably pretty wired. But if "we" are elderly males who have never attended school and are living in Zimbabwe, we're probably not watching videos on YouTube.

For more online buzz, you can try some of the links below.