It's a wired world. 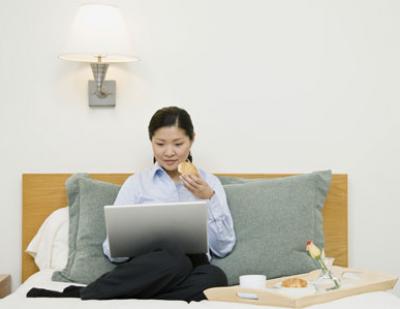 These days, there's not much you can't do on the Internet. People date via their computers, shop, watch TV and send e-mails and instant messages. They also play video games, check sports scores and look for medical advice online. People can live a relatively comfortable life behind their computer screen.

Back in the old days, you might have met your future spouse through a coworker or at a college basketball game. Today, you're just as likely to meet him or her on one of the more than 800 online dating services that exist [source: Marsan]. You'd be in good company. More than 50 million people in the United States alone participate in online dating [Epstein]. In 2008, the online dating industry is expected to bring in $600 million, and hopefully snag you a beau along the way [source: Epstein].

Once you've found that lifelong partner, why not register for some wedding presents online? A survey of Internet users revealed that 875 million people worldwide shopped online in 2007, citing reasons like convenience, flexibility and better prices [source: Nielsen Company] And they're buying a lot more than wedding presents. Many retailers, from grocery stores and pizza parlors to clothing companies and hotel chains, offer online purchasing options, hoping to cash in on what was a $81 billion industry in 2005 and is expected to reach $144 billion by 2010 [source: Muse].

While you're doing the shopping for your wedding, go ahead and send the invitations. Don't waste hundreds of dollars on stamps; just send e-cards! Granted, wedding invitations may not be the ideal thing to send electronically, but more people are turning to e-mail as a major form of communication, both personally and professionally. A technology market research firm estimated that there were 1.2 billion e-mail users in 2007, and predicted that number would rise to 1.6 billion by 2011 [source: Brownlow]. In 2006, 183 billion e-mails were sent each day [source: Brownlow]. If you assume a 2006 world population of 6.5 billion, that averages out to 28 e-mails per person per day. That's a lot of emoticons.

E-mail is so ubiquitous that you may even get reminders about upcoming appointments with your doctor in your inbox. If you still go to the doctor, that is. A survey conducted in 2007 showed that 160 million U.S. adults, or 71 percent of the population, have searched online for health-related information [source: Harris]. That's not all good news though. The American Dietetic Association worries that the Internet has led to a disturbing spread of misinformation that can damage people's health. Some physicians, though, think that the abundance of information can have a positive impact if people supplement it with doctor visits [source: Chekal].

The Internet has had a significant impact in the workplace as well, serving as both blessing and curse. More than fifty percent of U.S. employees use a computer on the job, and 42 percent have Internet access, according to a report published by the U.S. Census Bureau [source: Day et al.]. Businesses that use the Internet often benefit from reduced operating costs, the ability to reach more customers and easier access to information. However, that same easy access to information often tempts employees, who send e-mails, check sports scores, shop and even play games online.

Not surprisingly, the spread of the Internet has markedly affected societies around the globe. Is the availability of so much information a good thing, or is it a disaster waiting to happen? Find out some of its effects next.