Looking Ahead to Future Communication 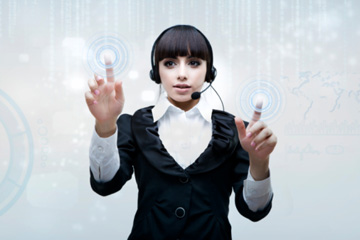 The classic example of augmented reality is the restaurant review. You could stand in front of a restaurant and, through an augmented-reality system, read customer reviews or view the daily specials without ever walking inside. But the applications don't have to stop with locations. Augmented-reality systems might extend to people as well. Imagine looking at a stranger and seeing that person's name, Facebook profile, Twitter handle and other information. Clearly, augmented reality systems will raise concerns about privacy and safety, but such systems are already in development.

Then there's video conferencing. While the technology has existed for years, video calls aren't popular in the United States. It might be because the hardware hasn't been compelling or cost-effective enough. But now webcams are starting to appear on televisions and are standard on many laptops. Are we about to enter an era of video conferencing, or is it too much work to make sure you and your house look nice before you order that pizza?

One drawback to video conferencing is that it either requires you to stay in one place for the duration of the call or to hold a device so that you're visible for the whole conversation. We've become used to having a great deal of freedom while on the phone. Will we really adopt a technology that will necessitate that we keep still? Perhaps we'll use video conferencing for special occasions or short conversations.

Language barriers are disappearing as well. Devices that can translate languages in real time are allowing people from different countries and cultures to communicate without the need for an interpreter.

In the distant future, we may be able to communicate by sending our thoughts through a network directly into someone else's brain. We're decades away from such technology, but scientists are working on creating brain-computer interfaces that allow people to transmit thoughts directly to a computer. Perhaps 50 years from now we'll all use an electronic version of telepathy.

The technology of communication evolves at a blistering pace. It may turn out that our predictions don't even scratch the surface. Only time will tell.

Learn more about communication through the links below.