10 High-tech Tools on the Typical Farm

Browse the article 10 High-tech Tools on the Typical Farm 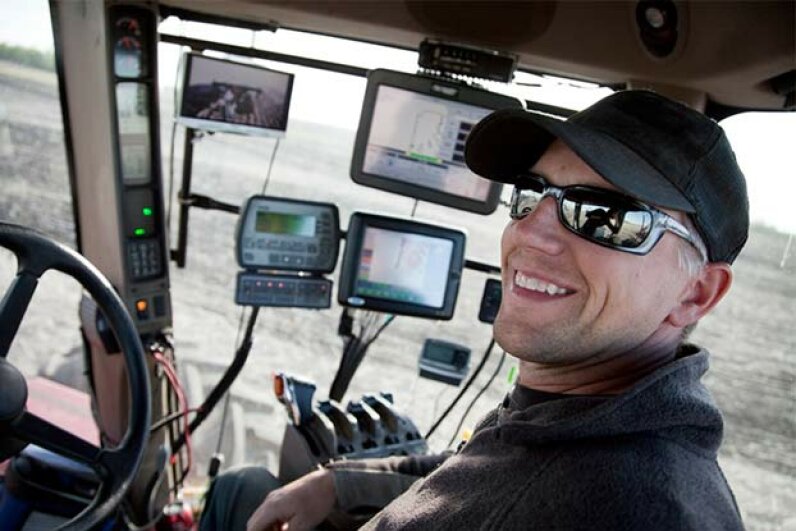 Nowadays, farmers have lots of high-tech equipment to help them out. Vicki Reid/Getty Images

Being a farmer is hard work. Sure, you get to spend all day outdoors, and there's that nice supply of incredibly fresh and organic food at your fingertips. There's also the crack-of-dawn starting times and 14-hour days filled with hard physical labor, ripe animal manure and delicate cow udders. Fortunately, technology is making its way down on the farm. It's also making the work of living off the land just a little bit easier.

Back in 1794, Eli Whitney secured a patent for his cotton gin, the revolutionary machine that made de-seeding balls of the fluffy, white stuff a much more efficient process. In 2014, modern inventors are increasing farming efficiency and effectiveness with everything from GPS-equipped tractors and robot milkers to hand-held gadgets that measure nitrogen levels in soil [sources: History, van Vark].

Heigh-ho, the derry-o. The farmer's got some new toys to play with on the dell. While some of them may not have made it yet to the typical farm, most already have and others will, if pricing goes down. 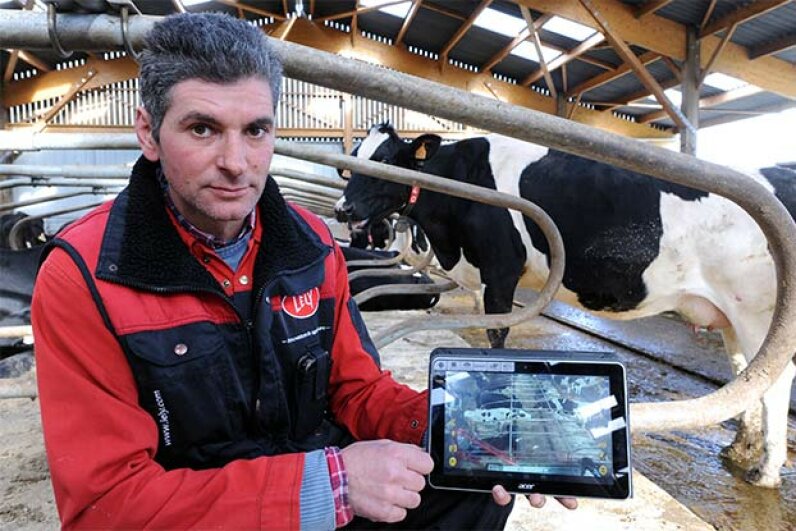 French breeder Jean-Pierre Dufeu shows on his tablet device, the live feed from the video surveillance cameras set up in his stable, as well as data from his milking and feeding robots. JEAN-FRANCOIS MONIER/AFP/Getty Image

If you've ever milked a cow before, you may already know that yanking on udders isn't much fun. It's also a time-centered process (starting before dawn) that requires several farmhands who could be performing other tasks. With good help so hard to find, some farm owners are turning to robots to do their dirty work.

Robotic milking stations require just one person to feed and milk scores of cows. These machines, which allow the cows to line up for milking when they choose, don't only extract the white cream from their "users;" they also monitor everything from milk output and number of milkings per day to the number of steps that a cow takes in a given day. (A cow that spends most of its day standing around is a cow in heat). Surprisingly, cows take to the mechanical milkers very well, and they seem to like being milked as often as five or six times a day, as opposed to the usual human schedule of twice per day [source: McKinley]. 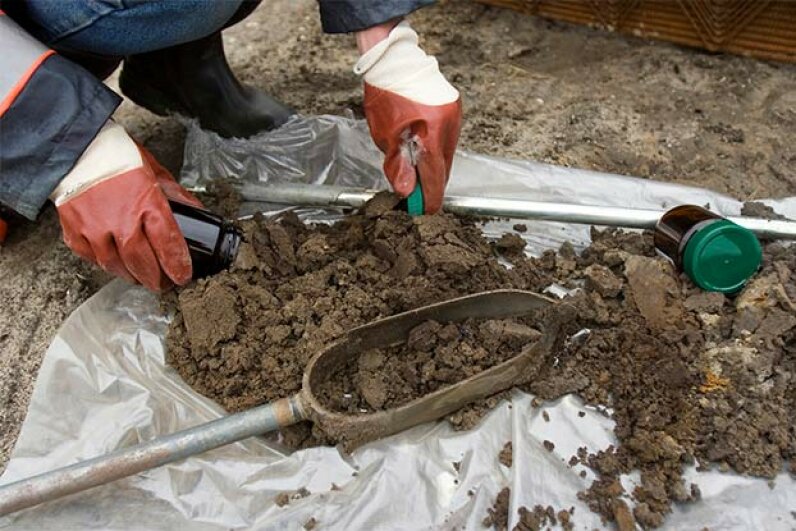 Old-school soil sampling involved a shovel and some back-bracing work. The AutoProbe machine pulls behind the tractor and picks up samples automatically. Bart Coenders/Getty Images

The AutoProbe may sound like a strange tool used by the same aliens who leave creepy crop circles in rural farm communities overnight. Or maybe it's that cold metal object that haunting extraterrestrials used to go to town on the people of South Park in the classic episode "The Stick of Truth." In this case, however, the truth is that farmers use AutoProbes to take dozens of soil samples in a matter of seconds [source: Potter].

The machine routinely digs about 6 inches (15 centimeters) below the surface of a farm, taking samples while being pulled behind a tractor. No more hunting and pecking with a metal pole. Instead, growers can take consistent samples with the help of GPS technology and compare them from the same areas over time [source: Potter]. Soil sampling is very important for farmers as it give them information on what kind of nutrients their soil will need for maximum crop production. 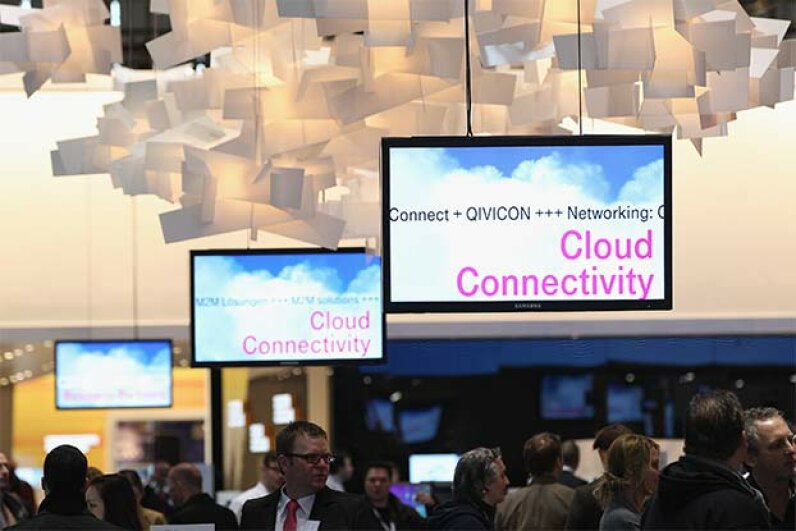 Visitors and employees crowd the Deutsche Telekom stand at the CeBit 2012 fair. A 2014 survey showed that 17 percent of farmers used cloud computing to store and share data. Sean Gallup/Getty Images

Cloud computing isn't just for office jockeys and tech geeks. Like every other business, farming requires the folks running the show to have a good handle on all types of data. That includes inventory levels, equipment servicing schedules, weather patterns and – of course – crop yields.

About 17 percent of farmers currently use cloud computing to store and share data, according to a 2014 Farm Journal survey. By storing the information on a remote server that's accessible via the Internet, these users can sync their data on various computers and other devices and take advantage of customized software to get a more accurate picture of exactly what's happening down in the fields [source: Howard]. 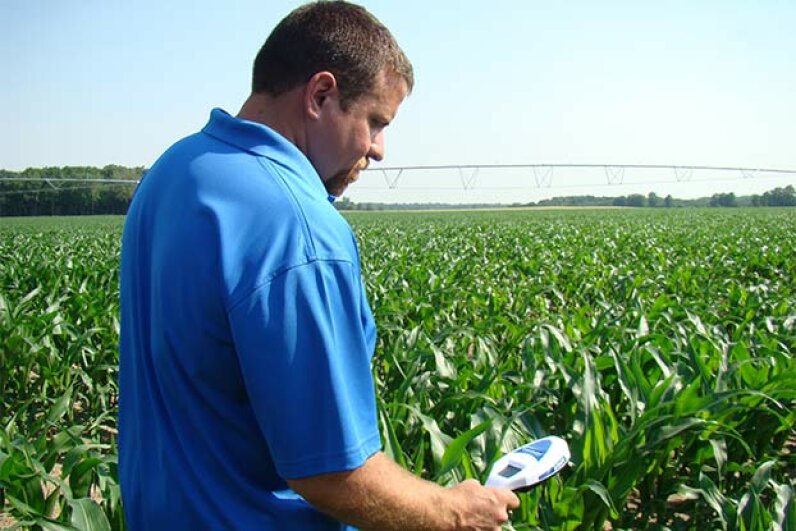 The GreenSeeker system measures plant health right in the field, and allows the farmer to use fertilizer (which contains nitrogen) only when necessary. Trimble

Nitrogen is one of the key ingredients in any good crop fertilizer. The chemical enhances crop production for plants that take in the fertilizer, process it and release it back into the air. The trouble is that nitrogen from fertilizers not taken up in the air can end up in groundwater. This not only contributes to climate change, but can also be harmful to fish and other marine life. Too much nitrogen can also injure the crops themselves [sources: Nolte, van Vark].

Enter: GreenSeeker. The hand-held device as well as the boom-mounted version include an optical sensor that measures plant health so that farmers can use fertilizer efficiently. The sensor sends bursts of red and infrared light to the crops and measures the lights that the plants reflect back. The greater the light reading, the healthier the plant and the less need for fertilizer [sources: Trimble, van Vark]. 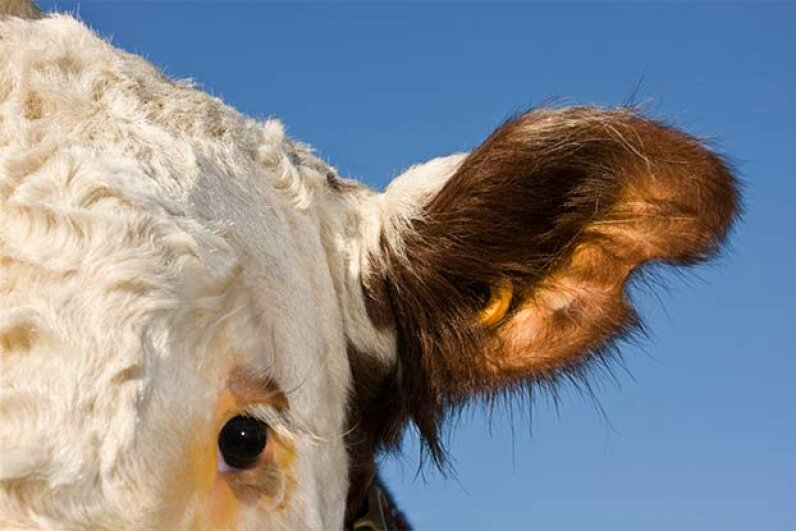 This Hereford cow has an RFID tag in its ear. The tag lets the farmer know how much and when each cow is eating. kycstudio/Getty Images

Keeping tabs on ol' Bessie the cow got a little bit easier with the advent of electronic ear tags. Equipped with radio frequency identification (RFID) chips, the tags can communicate with antennas placed on feeding troughs so that farmers know when – and how much – each of their cattle is eating. Changes in eating patterns are often a sign that something is wrong with a cow [source: Coxworth].

Similarly, some cows have pedometers on their ankles to tip farmers off as to how much time they spend lounging or standing still, which – in addition to potentially being a sign that a cow is in heat – can also indicate health issues. Identifying and isolating problems like foot-and-mouth or mad cow disease can mean the difference between losing one cow and losing a whole herd of cattle [source: Coxworth]. 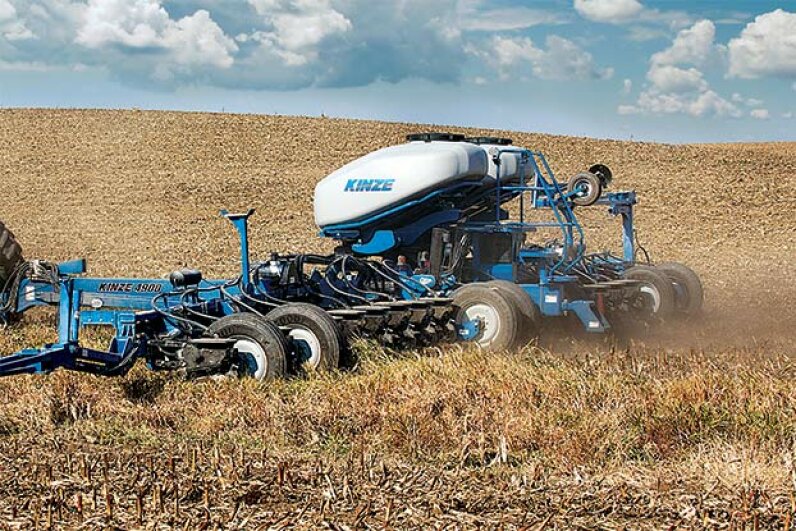 Proper farming isn't just hard work, it's also a craft. That includes making all kinds of decisions about what to plant and where to plant it. Different fields are better suited for different types of seeds, even if they're growing the same type of crops. So-called "workhorse" hybrid seeds may be necessary in more challenging environments, for example, while "racehorse" hybrid seeds may help maximize output in better soil [source: Kinze Manufacturing].

Billed as the first machine of its kind, Kinze Manufacturing's electric multi-hybrid planter is intended to help farmers enjoy the best of both worlds by giving them the ability to automatically change the seeds they plant as the machine moves from one field to another. The technology uses a single seed tube in order to eliminate gaps or hiccups when transitioning from one seed type to another [source: Kinze Manufacturing]. 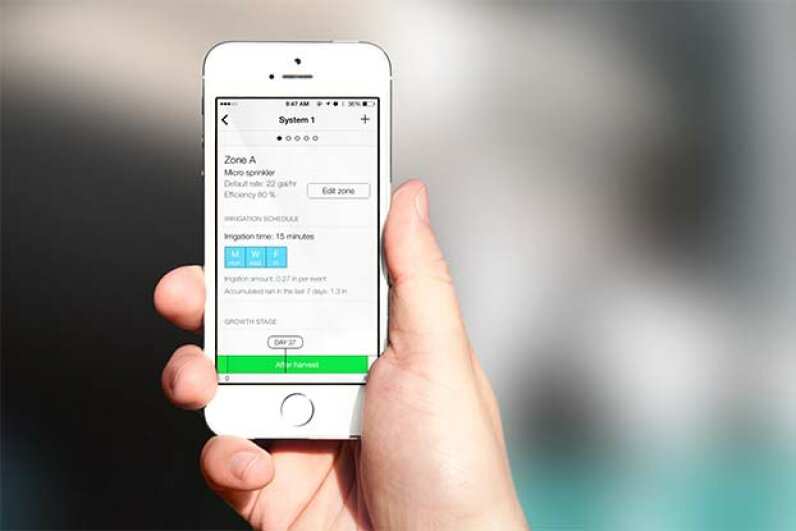 One of the most important jobs of a farmer is to make sure that he uses the water he has judiciously (especially if rain is not in the forecast). A new set of smartphone apps called SmartIrrigation are aimed at helping cotton, strawberry and citrus farmers manage the water they use on their crops by taking into account local weather conditions.

Developed by a University of Georgia agricultural scientist, the apps use GPS technology already available in smartphones to determine when users should water their crops by estimating how much H2O the plants are using each day and factoring in area rainfall totals, via connection with the closest weather station. It's not just for farmers: A home user version lets lawn jockeys determine when to break out the sprinklers [sources: Beckham, SmartIrrigation]. 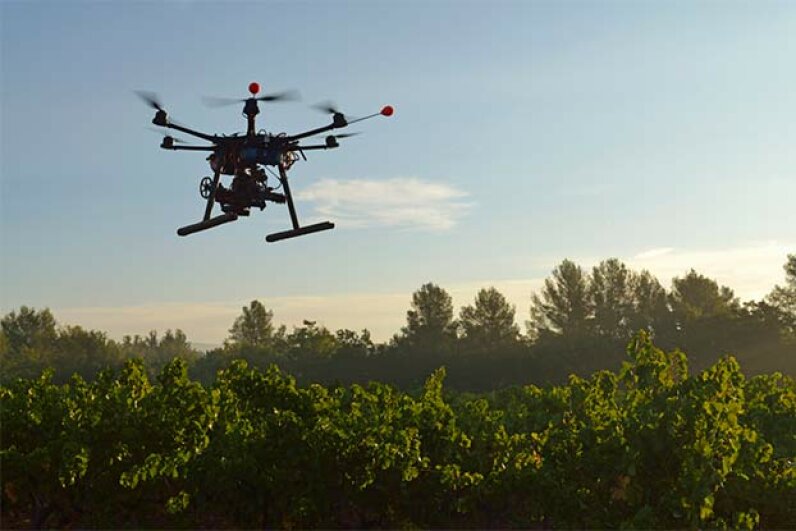 Drones, like this one filming a vineyard, alert growers to problems not visible from ground level, like fungal infestations. Sami Sarkis/Getty Images

Talk about drones, and a lot of folks will probably assume that you're referring to the ones used to gather intelligence and drop bombs on suspected terrorists in far-flung countries. For farmers, however, the machines have the capacity to serve as an important eye in the sky. Cameras strapped to drones allow growers to closely monitor their crops, root out pests and ensure that their water is being used efficiently. All that at a price tag of less than $1,000 a pop [source: Anderson].

Drones used in the agricultural context are usually small flying helicopters or quadcopters that can be autopiloted via GPS and are equipped with a point and shoot camera. Software, rather than a human operator, does the auto piloting, controls the camera and stores and sorts photos to give farm owners a detailed depiction of the state of their vegetation and alert them to patterns not visible from the ground [source: Anderson]. 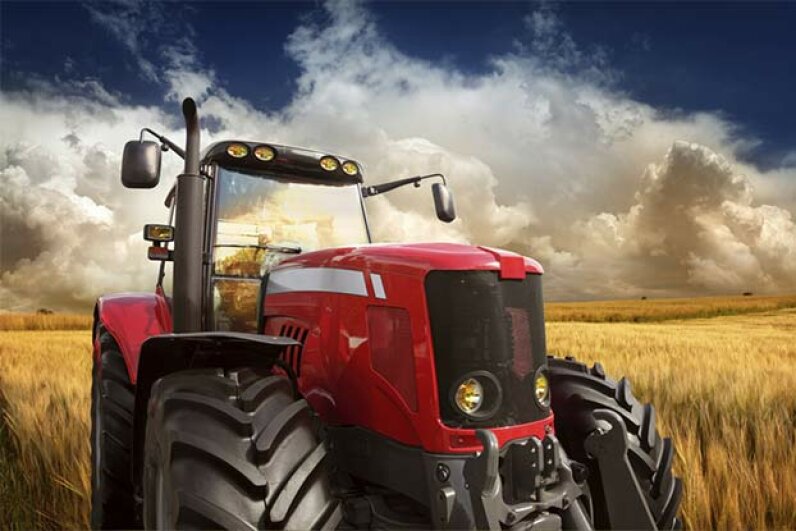 Would you be open to letting your tractor drive itself? narvikk/Getty Images

The driverless car is an exciting new technology that could revolutionize life on the road. For some of us, it's also incredibly frightening. The idea of traveling down highways at top speeds with no one behind the wheel is hard to wrap our heads around.

Farmers are apparently also feeling a little skittish about letting the machines do the driving on their land. Those behind the technology, however, say that it's just one more invention that stands to make the work of planting and growing a whole lot easier. With this technology, the farmer operates one tractor which links to others that could mimic the first tractor's mode. Driverless tractors are a pricey – in 2013, they cost more than $800,000 each – but they can work around the clock without a human operator and plow more precisely than most human- driven tractors. They also have the potential to allow older farmers to work later into their lives by letting the machines do the physically taxing job of driving a tractor [source: Espinoza]. 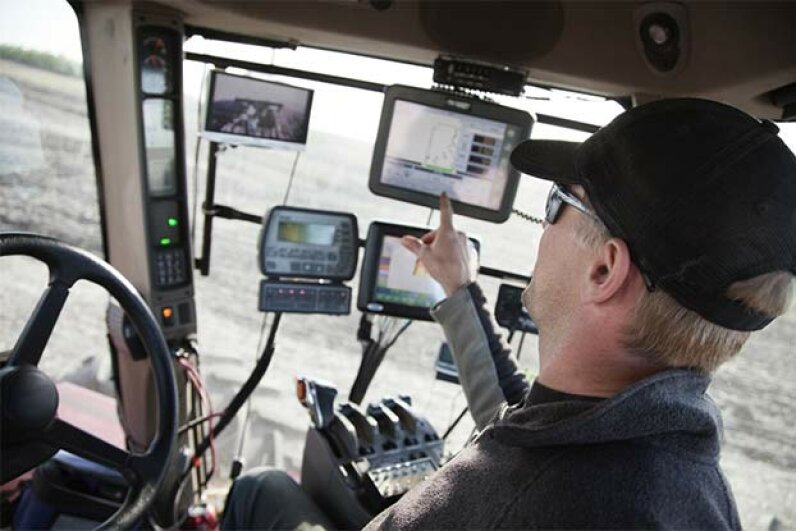 This farmer monitors several things via GPS and other high-tech tools in his tractor. LivingImages/Getty Images

Farmers who aren't yet ready to hand over the tractor keys to a machine can still take advantage of new technology to make the most of their time behind the wheel. In the same way that GPS helps drivers find the shortest route from points A to B, the mapping systems are being widely used to help farmers follow a straight line when plowing their fields for planting.

In a 2014 survey by British publication Farmers Weekly, growers cited GPS steering as the top new farm technology in use, ahead of robotic milking machines and smartphones. It allows them to save time, energy, fertilizer and seed by ensuring that they don't cover the same area twice [source: Griffiths].

I'm no farmer, but I was certainly glad to learn about all of the technological advances coming to the agricultural industry. You see – like any urban yuppie worth his salt – I want my food organic, I want it fresh and I want it at the lowest possible price. I also don't really want to wait in line for it. Here's hoping that the push for efficiency eventually makes its way to my local farmers market.