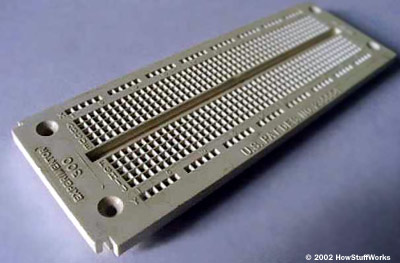 In the article How Boolean Logic Works, we looked at seven fundamental gates. These gates are the building blocks of all digital devices. We also saw how to combine these gates together into higher-level functions, such as full adders. If you would like to experiment with these gates so you can try things out yourself, the easiest way to do it is to purchase something called TTL chips and quickly wire circuits together on a device called a solderless breadboard. Let's talk a little bit about the technology and the process so you can actually try it out!

If you look back at the history of computer technology, you find that all computers are designed around Boolean gates. The technologies used to implement those gates, however, have changed dramatically over the years. The very first electronic gates were created using relays. These gates were slow and bulky. Vacuum tubes replaced relays. Tubes were much faster but they were just as bulky, and they were also plagued by the problem that tubes burn out (like light bulbs). Once transistors were perfected (transistors were invented in 1947), computers started using gates made from discrete transistors. Transistors had many advantages: high reliability, low power consumption and small size compared to tubes or relays. These transistors were discrete devices, meaning that each transistor was a separate device. Each one came in a little metal can about the size of a pea with three wires attached to it. It might take three or four transistors and several resistors and diodes to create a gate.

In the early 1960s, integrated circuits (ICs) were invented. Transistors, resistors and diodes could be manufactured together on silicon "chips." This discovery gave rise to SSI (small scale integration) ICs. An SSI IC typically consists of a 3-mm-square chip of silicon on which perhaps 20 transistors and various other components have been etched. A typical chip might contain four or six individual gates. These chips shrank the size of computers by a factor of about 100 and made them much easier to build.

As chip manufacturing techniques improved, more and more transistors could be etched onto a single chip. This led to MSI (medium scale integration) chips containing simple components, such as full adders, made up of multiple gates. Then LSI (large scale integration) allowed designers to fit all of the components of a simple microprocessor onto a single chip. The 8080 processor, released by Intel in 1974, was the first commercially successful single-chip microprocessor. It was an LSI chip that contained 4,800 transistors. VLSI (very large scale integration) has steadily increased the number of transistors ever since. The first Pentium processor was released in 1993 with 3.2 million transistors, and current chips can contain up to 20 million transistors.

In order to experiment with gates, we are going to go back in time a bit and use SSI ICs. These chips are still widely available and are extremely reliable and inexpensive. You can build anything you want with them, one gate at a time. The specific ICs we will use are of a family called TTL (Transistor Transistor Logic, named for the specific wiring of gates on the IC). The chips we will use are from the most common TTL series, called the 7400 series. There are perhaps 100 different SSI and MSI chips in the series, ranging from simple AND gates up to complete ALUs (arithmetic logic units).

The 7400-series chips are housed in DIPs (dual inline packages). As pictured on the right, a DIP is a small plastic package with 14, 16, 20 or 24 little metal leads protruding from it to provide connections to the gates inside. The easiest way to cons­truct something from these gates is to place the chips on a solderless breadboard. The breadboard lets you wire things together simply by plugging pieces of wire into connection holes on the board.

All electronic gates need a source of electrical power. TTL gates use 5 volts for operation. The chips are fairly particular about this voltage, so we will want to use a clean, regulated 5-volt power supply whenever working with TTL chips. Certain other chip families, such as the 4000 series of CMOS chips, are far less particular about the voltages they use. CMOS chips have the additional advantage that they use much less power. However, they are very sensitive to static electricity, and that makes them less reliable unless you have a static-free environment to work in. Therefore, we will stick with TTL here.

What’s the Difference Between LCD and LED?