What's the difference between RFID and NFC?

You Down With NFC (Yeah, You Know Me) 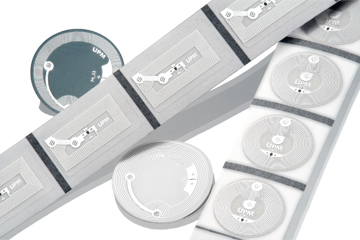 NFC tags are getting cheaper by the day. They now come rolled in mass quantities that can be distributed in many places and products.
Courtesy NFC Forum

RFID is a one-trick tech: A reader detects and pulls information from a tag. That's about the extent of these systems. NFC is more complex.

As you just read, NFC duplicates RFID's feat by reading smart tags, thanks to its read/write operation mode. But in addition to read/write capabilities, NFC has two other modes, both of which involve dynamic, two-way communication: card emulation and P2P (peer-to-peer). That's where smartphones and other NFC-capable devices come into play.

By 2014, 50 percent of smartphones will have integrated NFC chips that basically turn your phone into a digital wallet. Touch your phone to an NFC checkout terminal, and the NFC chip automatically leaps into card emulation mode. In one tap, you'll pay for your groceries, redeem electronic coupons and collect loyalty points. It's called contactless payment. Your phone, in other words, replaces all of those credit, loyalty and gift cards, making payment and rewards redemption much quicker and more convenient.

NFC's not done yet. With its P2P mode, you can easily share information and pair all sorts of devices.

Let's assume that on your smartphone you have a whole collection of digital Black Friday coupons for a local superstore. You can share those discounts with your friend just by tapping her phone with yours.

And while you're waiting for the doors to open at midnight, you can stave off boredom by playing online games. Here's where NFC's pairing ability comes in handy. Instead of gaming with strangers around the world, you can tap your friend's phone and she can join the fray without any sort of complicated setup procedure.

That simple pairing function will work with far more than smartphones. You'll tap a notebook against a router to create instant, secure WiFi connections using zero passwords -- or touch a camera to an inkjet printer to start printing a photo.

Your doctor will affix an NFC health monitoring tag to your skin. That tag will send streams of data on your body's temperature, sugar levels and much more right to your smartphone, which then relays that data to your nurse.

RFID knows its role. It's mainly a critical tracking and inventory control technology. But RFID's little cousin NFC is still evolving. It'll be years before NFC grows fully into its skin, and when it does, it will likely be as ubiquitous and useful as its RFID kin.