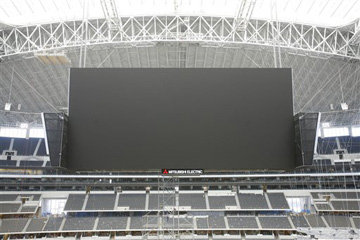 Despite the objections of various coaches and players, the scoreboard in the Dallas Cowboys stadium isn't likely to go dark soon.
AP Photo/Matt Slocum

There's no denying that the massive high-definition scoreboard makes a statement. Perhaps that statement is that everything really is bigger in Texas. But not everyone is happy about the display.

One person who wasn't thrilled about the display was Tennessee Titans coach Jeff Fisher. Fisher sits on the NFL's competition committee and has been quoted as saying the display has "a lot of issues" [source: Mortensen]. Perhaps one of the contributing factors to Fisher's opinion on the matter stems from the first NFL game to be played in the new stadium.

The preseason game took place on Aug. 21, 2009, between the Dallas Cowboys and the Tennessee Titans. In the third quarter of the game, Titans reserve punter A.J. Trapasso kicked the ball so high that it hit the screen. Fisher threw a red flag to challenge the referees and have the fourth down replayed. Dallas Cowboys owner Jones responded by saying that it wasn't a big deal -- if a ball collides with the screen the rules allow for another kick. He also said that anyone who hit the screen was likely trying to do so on purpose [source: Kuharsky and Mosley].

Kickers and coaches have complained that the board is in the way, particularly for kickers who specialize in creating a long hang time with their kicks. The Dallas Cowboys management has said that only kickers who are trying to kick the ball straight up would have a problem. The debate continues.

Considering the size of the display and how it's tethered to the stadium, alterations aren't likely. There's very little room above the screens to raise them very far, and the cost to change the scoreboard would likely be extravagant. For now, it looks like the stadium will remain as it is. The real question will be if the scoreboard will generate more controversy on Feb. 6, 2011. That's when the stadium will serve as the location for Super Bowl XLV.

Learn more about HDTV technology by following the links below.