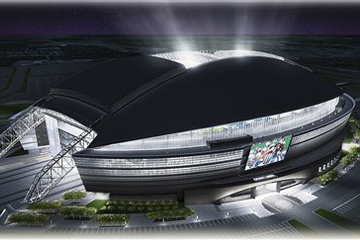 The artist's rendering of the Dallas Cowboys stadium gave a hint of what the world could expect from the $1 billion facility. See more football pictures.
AP Photo/Dallas Cowboys

There's nothing quite like attending a big football game in person. The excitement of the crowd is contagious. You get to share the experience of cheering on your favorite team with thousands of other fans. But if you're sitting in the upper sections of the stadium, you may feel that you're still missing out on the action.

That's not the case at the current Dallas Cowboys stadium. The stadium opened its doors officially on May 27, 2009. The facility features two massive arches that support the longest single-span retractable roof in the world [source: Dallas Cowboys]. It has several restaurants, clubs, luxury suites and other amenities. But perhaps the feature that has generated the most buzz is the scoreboard that hangs 90 feet (27.5 meters) above the field.

The scoreboard has four video screens, and Guinness World Records has designated it as the largest high-definition display in the world [source: Nusca]. Even if you're in the nosebleed seats, you're able to follow the action on the enormous displays.

The display cost the Dallas Cowboys $40 million. Mitsubishi designed and built the screens. The scoreboard created buzz in the NFL and later became the center of debate. Could the new scoreboard actually interfere with a football game?