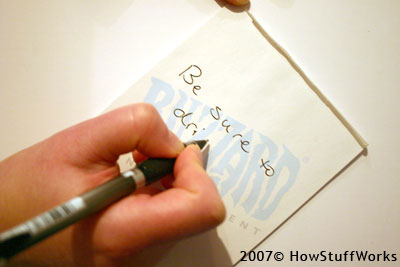 The Seebeck-effect recharging system can generally keep a person's cell-phone implant running. However, the prolonged recharging time can force users to limit conversation length or the number of calls they make in a short period of time. The battery power and the relatively small amount of available space in which to implant components also reduces the number of bells and whistles the phone can have. For example, since there's no screen, you can't take pictures, watch movies or play games using a cell-phone implant.

You also can't get turn-by-turn GPS directions, since the system has no GPS receiver. However, in the United States, cellular phones must be able to transmit their locations to public safety answering points when people dial 9-1-1. When a person calls 9-1-1 using a cell-phone implant, the cell phone network uses the signal's angle of approach to two or more towers to determine a user's location. This location-tracking ability has raised concerns among privacy advocates. For some people, the idea of a permanently imbedded device that can report a person's location can be unnerving.

The implant does retain one commonly-used cell phone feature -- SMS messages. The process of sending text messages, though, is a little complex. The user must first press the on/off switch, then perform the right gesture to activate the phone's SMS mode. He must then make the gesture for each letter in the message, followed by a gesture designating the end of the message. The next series of gestures lets the implant know the number to which to send the message. When receiving a message, the implant reads off the incoming data letter by letter, making it advisable for users to carry a pen and paper so they can make sense of their messages.

Developers originally intended to use a piezoelectric accelerometer implanted in the tongue to provide a user interface. That way, all of a user's gestures could take place in the privacy of his own mouth. However, connecting the sensor to the rest of the circuitry proved to be a challenge. Users in early studies experienced long recovery periods, persistent swelling and reduced speech clarity. Because of the tongue's near-constant motion and the distance between it and the ear, connecting circuits were prone to failure.

This led to the decision to place the accelerometer on the jawbone and to the use of head and jaw gestures. Although designers say the system is easy to learn, many users report that using it makes them self-conscious. Common analogies involve feeling like a cow chewing cud or a reject from the 1980s hair metal scene. In addition, some users have reported hitting the on/off switch while showering, brushing hair, inserting earrings or performing other tasks, causing the implant to interpret ordinary movements as gestures. In some cases, this has led to battery depletion as the user unknowingly transmitted private conversations and sensitive activities to friends' or relatives' voice mail.

In addition, the implant carries a number of safety precautions. Users cannot undergo MRI procedures because of the implants' metal components. The electronic components and batteries are hermetically sealed, but a few injuries have been reported due to seal failure or damage during accidents. In addition, a few users have reported allergic reactions, swelling or bald spots over the batteries, which are the only components that are generally installed under normal hair growth.

In spite of these challenges, the success of the cell-phone implant has opened the door for a variety of other implantable electronic devices. These include MP3 players, pedometers and digital cameras.