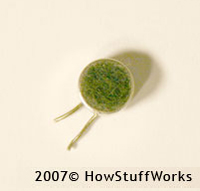 The cell-phone implant's microphone is tiny and fits in the earlobe.

Manufacturing small microphones and rounding the edges of microchips is relatively easy. Powering an implanted electronic device, on the other hand, isn't. Most current cell phones use lithium-ion batteries that are simply not suited to implantation in a person's body. First, they're too big -- most cell phone batteries, while relatively thin, are at least a few inches square. Second, the more compact the battery is, the thinner and more prone to failure its internal components are. Third, even the most efficient cell phone batteries lose power quickly during conversations. They have to be recharged frequently, sometimes for hours at a time. Finally, ordinary cell phone batteries are not safe for such a use.

Developers first turned to medical technology for a solution to the battery problem. The proposed solution involved pacemaker batteries, which can power a person's pacemaker for years. However, these batteries, which use lithium iodide rather than a lithium-ion battery's combination of lithium and carbon, turned out to be far too expensive. In addition, a pacemaker uses a relatively small amount of electricity, administered at intervals, to keep a person's heart beating regularly. A cell phone, on the other hand, needs a sustained source of power. Developers wound up with dead batteries and no way to recharge them.

The second attempt involved an array of very small batteries wired in series under a person's scalp. Users could recharge these batteries using inductive coupling, the same method used to recharge most electric toothbrushes. The recharging cord attached to the array magnetically, without piercing the skin. Unfortunately, fully charging a depleted battery took hours, and members of early test groups protested about the need to stay in one place during that time. Those who tried to recharge their batteries while sleeping often dislodged their cords accidentally or experienced vivid, disturbing dreams.

Finally, developers decided that the best option was to use the body's own energy to recharge the implant's batteries. They created a Seebeck-effect strip that transforms body heat into electricity. This device, a curved strip that fits in the space between the ear and the scalp, is the implant's only external component. Its positive and negative electrodes, which are hermetically sealed to prevent water entry and corrosion, penetrate the skin at the top end of the strip. By lifting a tiny, embedded latch at the bottom of the strip, the user can user pull it away from the skin for cleaning.

The recharging strip uses layers of two separate metals to turn a person's ear into a thermoelectric generator. The piece of metal in contact with the skin is warmer than the piece in contact with the air. This creates a thermocouple, which produces a current. Watch manufacturers have used a similar system to create self-recharging wristwatches.

The implant's recharging system connects to a serial array of batteries arranged in a grid under the user's scalp. These batteries are small and round, so they are less obtrusive than the large, flat batteries used in most cell phones. The thermocouple strip also has a very low profile, but it can cause eyeglasses and sunglasses to sit slightly askew, requiring adjustment to the earpieces.

The Seebeck-effect generator prior to custom fitting

The Seebeck-effect generator charges a person's implant batteries constantly, so there's no need to plug in. However, if the batteries become fully depleted during an extended conversation, it can take several days for the generator to bring them back to full power. This is one of the challenges that cell-phone implants still face. We'll look at others in the next section.